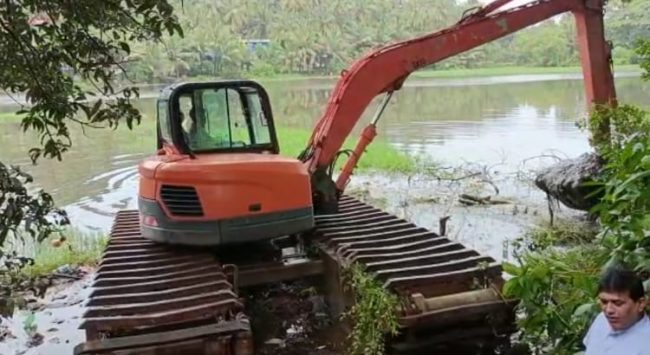 Goemkarponn desk
VASCO: Deweeding and desilting of nullah opposite Laxmi petrol pump in Vasco commenced on Friday in the presence of Vasco MLA and MMC councillors.
This year there was no flooding due to the early pre-monsoon work done in all wards, says the MMC chairperson.
On Friday, de-weeding works at the nullah opposite the Laxmi petrol pump were commenced. Later, Vasco MLA Krishna Salkar thanked the Water Resource department and the Mormugao Municipal Council for synchronising and undertaking timely Deweeding and pre-monsoon works.
He said in recent years, there has been flooding happening in various places of the municipal area, even due to the minor rain shower, but this year despite continuous rains, there is no flooding in municipal areas.
“This became possible because of the early pre-monsoon work in all wards. I have personally visited the water logging prone areas and saw that there was no flooding,” Salkar said.
Mormugao Municipal Council Chairperson Leo Rodriques warned people not to store water in the open, which could lead to mosquito breeding. He said that the Vasco locals must take utmost care to stop Dengue cases from increasing this time.
He also urged all 25 councillors to create awareness about vector-borne diseases in their respective wards. Rodrigues also assured to put several civic issues from Port town in place with the support of Vasco MLA Krishna Salkar.
Nandadeep Raut, the former MMC chairperson, said that surprisingly this year, there was no flooding in Vasco municipal area, and this became possible due to the timely completion of pre-monsoon works.
He further said that we need to be more cautious about the Dengue cases and should try to take utmost precautions to keep our surroundings clean.