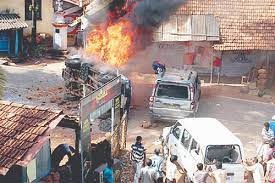 MARGAO: District and Sessions Court in Margao today has acquitted all accused in the murder case of two United Tribals Association Alliance (UTAA) activists, Mangesh Gaonkar and Dilip Velip, during the infamous UTAA agitation.
The case has been heard in the Sessions Court for the last 11 years. Both activists were suffocated to death when they took refuge in a cashew factory allegedly put on fire at Balli on May 25, 2011.
After arguments from all sides concluded, Justice Aga reserved judgement in the matter.
On May 25, 2011, over 10,000 agitators under the banner of the UTAA, led by Ramesh Tawadkar (then in the opposition), were demanding that the government accede to their 12-point charter of demands, including reservations.
Two persons were killed after a factory was set on fire by angry locals at Balli village during a tribals agitation. Tribal leaders Manguesh Gaonkar (26) of Gaodongri, Canacona, and Dilip alias Katu Velip (28) of Morpila, Quepem, were burnt alive allegedly by a mob when the tribal people agitating over reservation in government jobs went berserk and threw stones at vehicles and set fire to a forest outpost.
The two tribal youngsters and many others had taken shelter in the building to escape the mob’s fury. The duo, who were trapped inside the building, was later found dead.
The CBI had later charged a total of 14 persons for the offence of murder of the two deceased youths and setting fire to the building. One of the accused has expired during the pendency of the trial.
The Crime Branch, which is investigating the case, had also come under fire for being lax in arresting the accused involved in the carnage.
While one accused – Dipak Phaldesai, has been arrested, two are absconding. Of the total 15 people in the mob, the crime branch had zeroed in on only three accused.