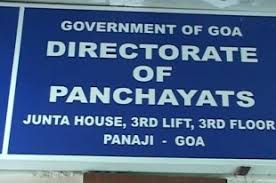 Finally, the Common Cadre in Village Panchayat will come into effect from January 1. The Directorate of Panchayat had issued order regarding transfer of VP staff from one panchayat body to another from time to time.

“It is pertinent to mention that as per clause 23 of the said Order, the Director of Panchayats will be the competent authority to transfer Panchayats employees from time to time for administrative or other reason from common list. Further. the transfer order shall be binding of all Village Panchayats,”

“It is also empowers the Director of Panchayats to delegate his power to the respective Block Development Officer by as specific order. The Village Panchayat Secretary shall relive immediately the Panchayat staff on receipt of transfer order from Directorate of Panchayats in order to join the transferred staff at the new place of posting The Village Panchayat Secretary on the date of relieving the Panchayat staff should issue pay slip and last pay certificate by giving full details of monthly salary and allowance admissible to the transfer staff and details such as deduction from monthly salary,”

Alter the issuance of aforesaid order dated 5th March 2019. the said order could not be implemented as this Directorate was in the process of collation of data for the said purpose.

Thereafter. the said matter was recently referred to the Government wherein the Government has conveyed its approval to implement aforesaid order dated 5 March 2019 in connection with transfer of Panchayat staff from one Panchayat to another wef. 1 January 2021.