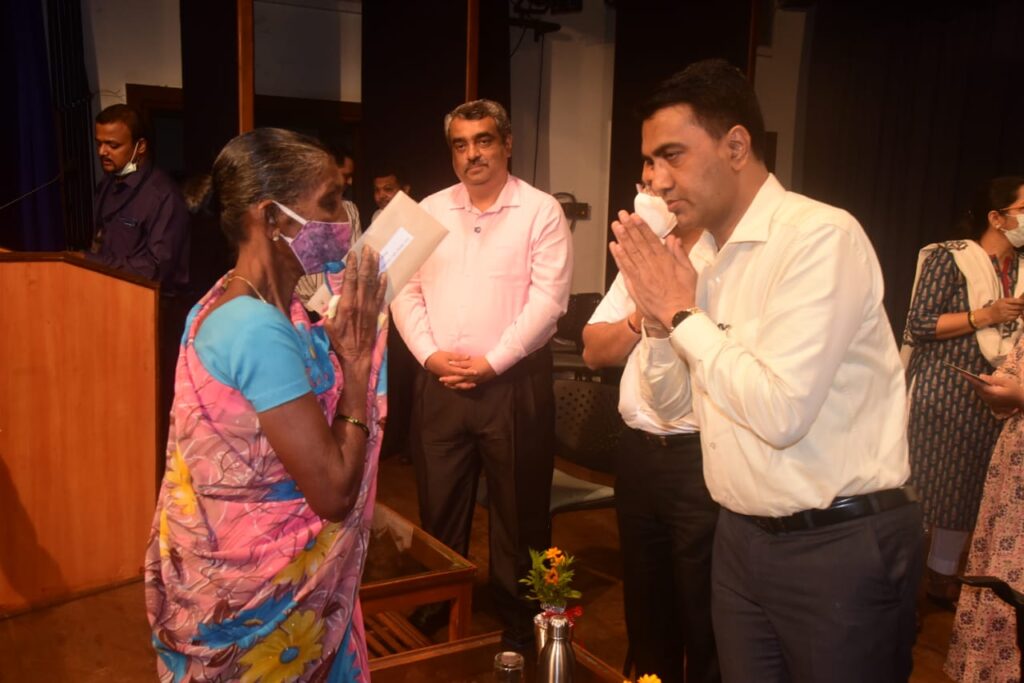 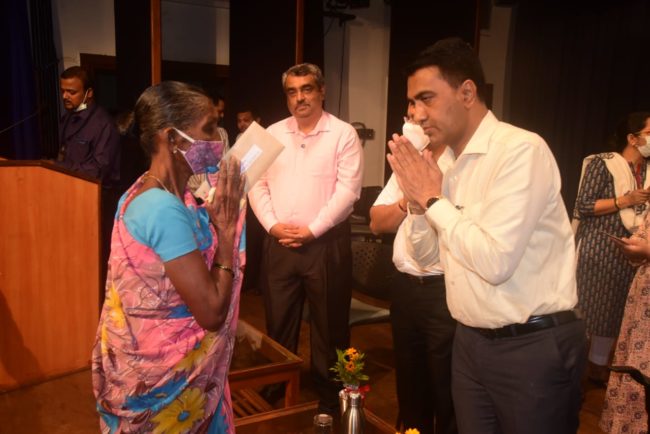 Goemakrponn desk
PANAJI: Today, the State Government disbursed financial assistance to people affected by the recent flood from the talukas of Sattari & Bicholim at a formal function held in the city.
The function was organized by the District Disaster Management Authority.
Recently, the heavy rain caused the flood in various parts of Sattari and Bicholim talukas, some parts of Canacona and Dharbandora from South District, which led to damage to property and agricultural crops plantation, etc.
The beneficiaries are 44 from North Goa and 25 from South Goa.
The Chief Minister recalled the situation when he received a phone call at 6:00 am regarding the flood situation at the Honda area in Sattari said he found that the district disaster team was already in action rescuing the people during his visit.
The disaster management, for the first time, used a helicopter to rescue the people. The team of Disaster Management Authority at flood-affected areas worked tirelessly throughout the day till the situation become normal. The officials of Fire and Emergency Services, Navy, Police Department have immensely contributed to tackling the problem. The Government will strive to compensate the loss to the people, he said.
He appreciated Rotary Club for cooperating with the Government to help the flood-affected families in the State.
Health Minister Vishwajit Rane said that for the first time in the history of Goa, the Government took quick decisions to extend financial assistance to flood-affected people and provide them relief. The areas of Sattari, Ganjem, Usgao and some areas of the Sankhalin constituency were severely affected.
There was a heavy loss of property due to the collapse of the house. People lost their household material, making the condition more miserable. This endeavour of the Government will definitely provide them relief. He thanked the Chief Minister for keeping his assurance given in the recent assembly session, he remarked.
The PWD Minister Dipak Pauskar, in his address, said that due to the sudden occurrence of flood situation, many areas were severely affected, leading to damaging of houses. He said people lost their household things and added that Chief Minister led from the front to tackle the situation by visiting the flood-affected areas personally. CM monitored the situation.
Secretary Revenue, Sanjay Kumar; Collector North Goa Ajit Roy;
Officers from Revenue Department, Mamlatdars, District Governor Rotary Club Gaurish Dhond and others attended the function.
Mamlatdar Bicholim Shri Pravin Pandit welcomed the guests.