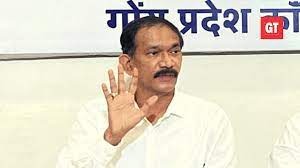 Goemmkarponn desk
PANAJi: Goa Chief Minister Pramod Sawant is trying to divert corruption issues grappled with the state and action to be taken on 21 Lokayukta orders by launching of Public Grievance Portal, alleged Girish Chodankar, former GPCC president.
“If Pramod Sawant is true to his intention, then he should first act on 21 reports submitted against public functionaries, including former and current Ministers by the then Goa Lokayukta Justice (Retired) Prafulla Kumar Misra,” Chodankar said.
Chodankar said that whenever there are allegations against cabinet ministers or BJP MLAs, Sawant safeguards them by diverting issues.
“Had he initiated action against the tainted Ministers by implementing the recommendations of Lokayukta, then people would have got confidence in the genuineness. When Sawant protects his cabinet colleagues, then how people will dare to voice against them as all know how tactics are used by BJP to suppress voice.” Chodankar said.
Chodankar said that if the Goa Right of Citizens to Time-Bound Delivery of Public Services Act is implemented properly, there will be no scope for corruption. Without this, it’s not possible to fight against corruption, Chodankar warned.
“By now, one thing is clear BJP can’t live without corruption. Hence, the time frame is not set for any work, and Sawant is not taking action against his ministers. If he can suspend government employees, then why no action on corrupt ministers.” he questioned.
Chodankar said that by mere launching the portal to fight corruption is just a farce and will not yield any results.
“This most corrupt government is not serious about fighting against corruption, which has a cabinet full of corrupt Ministers,” he said.
“If the government was serious in fighting corruption, they would have dropped Transport Minister Mauvin Godinho, who is facing serious corruption charges in court filed by BJP itself. They would not have admitted former Chief Minister Digambar Kamat, against whom Louis Berger cases are pending filed again by the BJP government. BJP has destroyed mining dependent by claiming Rs. 35,000 crore mining loot by Digambar Kamat. Health minister Vishwajit Rane with evidence, exposed land-related corruption by Michael Lobo, who was also admitted by BJP,” he said.
Chodankar pointed out that entire government recruitment was compromised, bypassing the Goa staff selection commission and transparency.
“Jobs were sold for cash, depriving deserving candidates. Various ministers and BJP functionaries are involved in various scams, which include Casino scams, GMC medicine scams, COVID & oxygen scams, ODP scams, land conversion scams, Drugs Scam, Labour Scam, Zuari Land Scam, Atal Setu Bridge Scam, SEZ payment scam, Panjim smart city scam, taxi meter scam, coal transportation scam, Investment Promotion Board scam and many other scams in our tiny Goa,” Chodankar said.
“Unless the government comes clean on this, nobody will take the Govt seriously on the corruption issue, and it will remain as a mere farce,” he said. The announcement of the Public Grievance portal is an attempt to hoodwink the people, divert attention from the corruption of ministers and yet make a facade of clean governance, the former GPCC chief said.