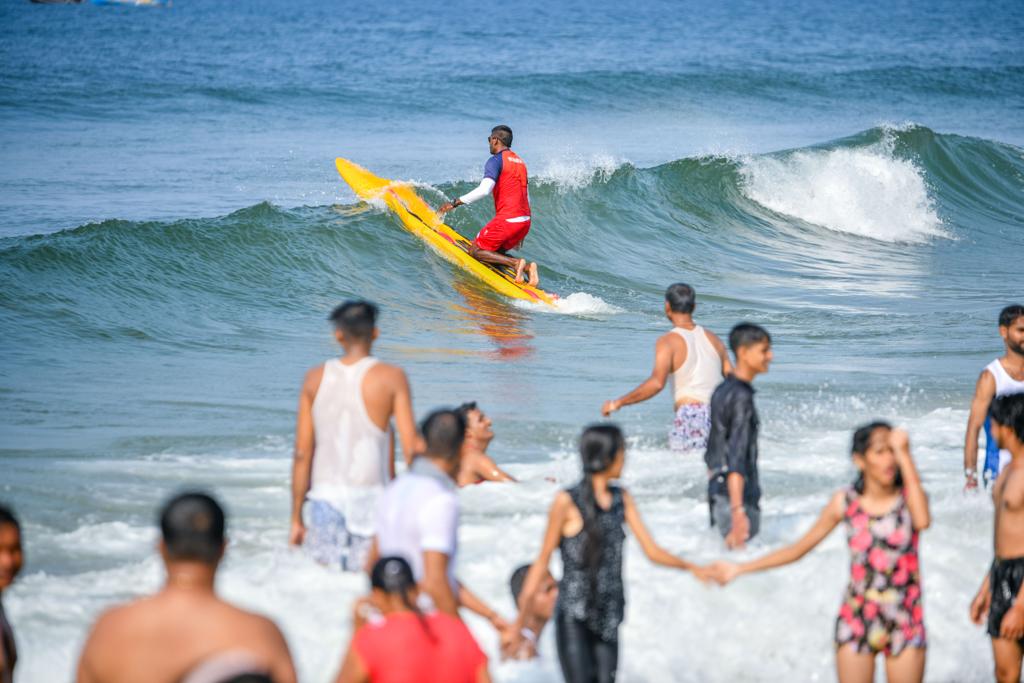 Goemkarponn
PANAJI: As tourists flocked to Goa to celebrate the long weekend that culminated with India’s 75th Independence Day, Drishti’s lifesavers were on high alert to monitor the increasing number of individuals on the beaches.  Over the long weekend, five individuals were rescued – three in Palolem and one each in Benaulim and Sinquerim.
With the monsoons still on, the state continues to experience rough weather conditions, including strong underwater currents, high waves, and rains. All beaches in Goa continue to be closed for swimming. However, people continue to venture into the waters.
A group of three young individuals, two males, and one female, aged between 22 and 24, while on a short swim in the Palolem river, were overcome by a strong current that left them stunned and helpless looking for reprieve amid their ordeals. Unable to hold themselves together, the three were split in different directions shouting for help. The Drishti lifesavers spotted the three and rushed to the struggling individuals caught in the bad current. With the help of a rescue tube, one individual was secured by the lifesaver Ashok, and the other two were secured by the two lifesavers, Nilesh and Jayesh who initiated the rescues on two jet skis. The three individuals were brought back to shore, and medical care was administered.
Meanwhile, at Benaulim, a 14-year-old boy enjoying a bicycle ride on the beach lost control and accidentally fell from his bike at the edge of the shore. The boy found himself amid a strong current that swept him into the deep. The boy was seen trying to signal for help by throwing his hands in the air. The Drishti lifesaver, Sagar noticed this and secured the boy with a rescue tube bringing him back to shore. The lifesaver helped the boy pick up his bike and safely guided him to the beach exit.
In Sinquerim, a 4-year-old boy and his family were in the waters when they were overcome by a strong wave. The young lad got separated from the family and was pulled into the rough waters.
Observing the situation unfold, the Drishti lifesavers rushed to the aid of the young boy and brought him back to shore with the help of the rescue tube. Following a medical check-up, the lifesavers found the boy in a state of shock. The boy’s situation reverted to normal after he was rushed to the nearest paediatric healthcare provider with the assistance of the lifesavers on duty