* They say house numbers were for issued to structures without proper construction or roof.

Goemkarponn desk
PONDA: Four out of eleven Panchmembers, along with Borim locals, protested today against Panchayat Secretary issuing House Number to one applicant without proper construction.
They said the structure is toilet-size and does not even have a roof over it. It is close to the electricity pole. Four Panchmember condemned the act of the secretary.
Panchmember Vinay Parpati from ward no 11, where the house number is issued for said structure, said he resigned over the issue as he was not taken into confidence.
He had submitted his resignation to Sarpanch.
He said though the secretary has power to issue emergency house numbers, he can’t give such house numbers without proper construction. 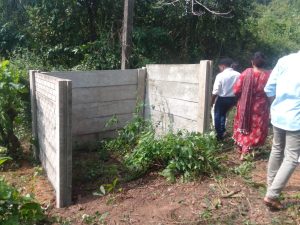 He said people had elected him, and he is answerable to them about development in his ward.
The other Panchmembers supported Vinay Parpati and said that without taking local Panchmembers into confidence and proper procedure, the house number should not be given.
Meanwhile, Borim Sarpanch could not be contacted on the phone for his reaction, while Secretary Rupesh Halarnakar, when contacted on the phone, said he was out of Goa and would give a reply later on the next day.