Will bring back Goa Dairy back to profit-making, says chairman Rajesh Faldesai 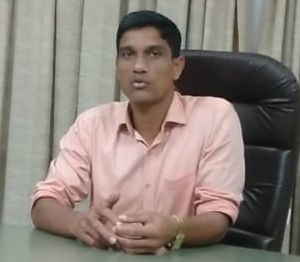 Goemkarponn desk
PANAJI: In a bid to meet the rising costs, Goa Dairy is mulling a milk price hike soon.
Goa Dairy Chairman Rajesh Faldesai said with the rising cost of production; Goa Dairy is mulling a hike in milk prices.
“This decision will come soon after the Board Meeting, which is going to take place soon,” he said.
Faldesai said Goa Dairy faces competition from some milk brands. Other brands in Goa have already hiked prices,” he said.
Faldeaai said Goa Dairy milk is prefered by Goans because of its quality and short supply within 24 hours of processing, while other brands take a lot of days to transport their milk to Goa.
When asked why the cattle feed plant of Goa Dairy is not operating for the past fifteen days, causing inconvenience and shortage of cattle feed to farmers, he said the cattle feed plant of Goa Dairy was temporarily not working due to a lot of outstanding dues to raw material suppliers.
He said the bills to the tune of crores were pending. They have almost stopped raw materials to us due to pending accounts, so cattle feed was stopped operating for want of raw materials. “Now, for the past two days, We have cleared the bills of some suppliers and restarted the cattle feed plant.
He also said that the decision to excess staff recruited in Goa Dairy put an extra financial burden on Goa Dairy.
“Many of the findings during the tenure of the Administrator appointed to Goa Dairy hit Goa Dairy’s functioning. When I was Chairman three years back, the sale was 70000 litres per day, but during the administrator period, it went down to 40,000 litres per day. Recently when Board Elections were held, and I took over the reins again as Chairman, we managed to increase its sale, and now today, it is 51000 per day,” he said.
He also said the payment by Marketing agents is delayed, and so it also affected Goa Dairy. He stated all measures are now taken to control this. He said his main motive is to bring Goa Dairy back on track on path of profit.