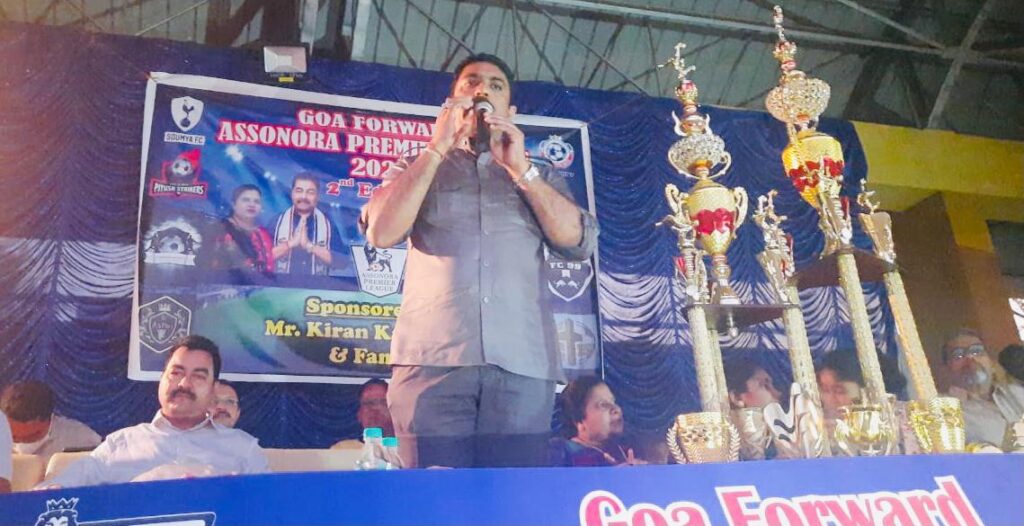 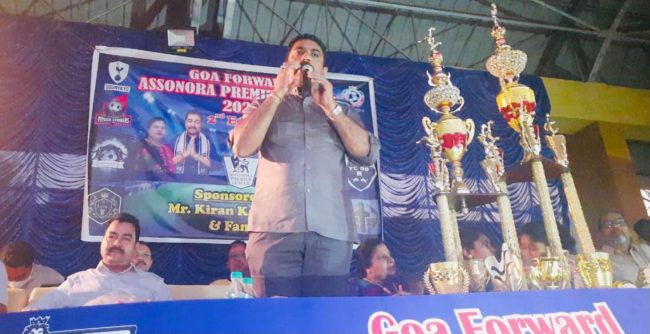 Sardesai said that football is in our blood , and quoted the former Chief Minister Parrikar who declared football as a State Sports and had invested in football infrastructure. Sardesai said that when Kiran Kandolkar was the Tivim MLA he took the intiative to construct this Assonora Sports Complex by spending lakhs of rupees, now that Kiran is no longer the MLA, the govt has failed to maintain the sports ground.

Sardesai further said that football ground is a nursery for budding talents. Our Players dream with aspiration that from this nursery one day they will play for the ISL or even for National Indian football team. Sardesai said that the Goa Govt priorities are different and that the state sport is now ignored by Dr.Pramod Sawant. The Govt doesn’t even have 7.5lakhs to pay for the PWD water bills for the ground,but has 100Crore to spend in name of 60th Goa Liberation Day celebrations by getting artists from outside Goa.

Sardesai also said that decades ago few people wanted Goa to merge with Maharashtra. Now the case is different, as citizens from Dodamarg are saying that they want to merge Dodamarg with Goa as their son of the soil is become the Chief Minister of Goa. Speaking on liberation day, sardesai said “Our freedom fighters fought for liberation, people like Dr.Jack de Sequeira fought for the opinion poll and kept Goa for Goans but here we have a chief minister who wants to finish Goa and Goemkars. People of Goa are saying Goyant Kolloso Naka, Chief Minister Dr.Pramod Sawant says Goyant Kolloso Zai and those opposing coal are termed as Anti-Nationals.”

If we need to keep football alive , goemkarponn alive we need to resolve to fight unitedly for a second liberation and liberate Goa from Dr.Pramod Sawant and his Govt said Vijai Sardesai

Goa Forward Party working president Kiran Kandolkar while speaking on the occasion thanked the voters specially from Assonora for giving a lead of over 700 in the recently concluded ZP Polls. Last time during the tournament I had said that Govt had failed to maintain the ground. It’s shame that PWD Dept has taken away the water meter for the non payment of 7.5lakhs water bill by the sports department. Today I appeal to the Govt specially to the sports department that if they can’t maintain this ground, Assonora Panchayat or Assonora Communidade or even Goa Forward Party is ready to adopt and maintain the ground for the future of football players and budding talents said Kiran Kandolkar

Newly elected Zilla Panchayat member Kavita Kandolkar thanked everyone for the resounding victory and assured the villagers of Assonora that she would work toward fulfilling all the commitments she made during the polls.