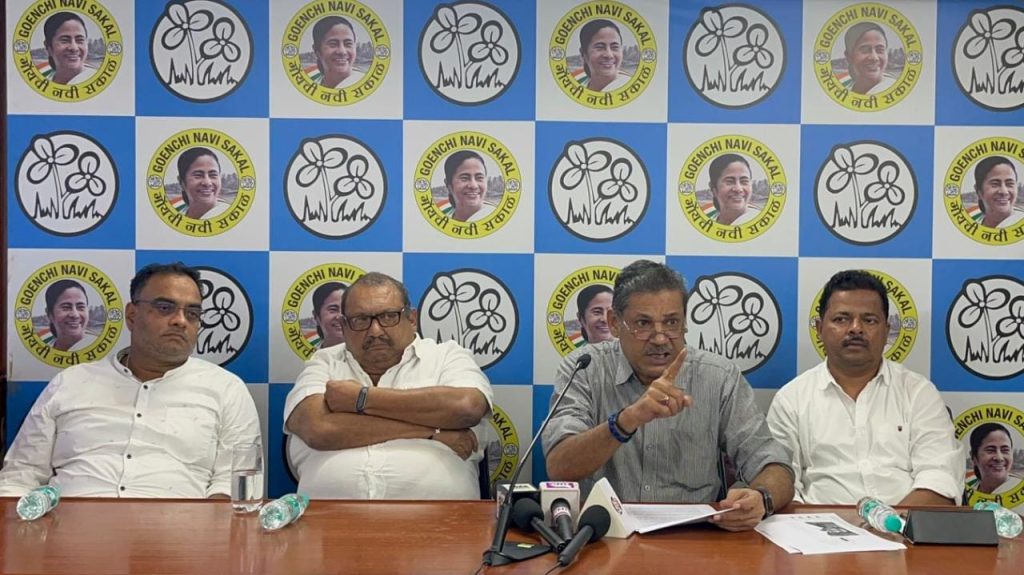 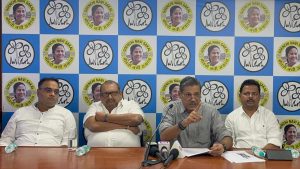 Goemkarponn desk
PANAJI: Goa Trinamool Congress’s Goa in-charge Kirti Azad launched a scathing attack on Prime Minister Narendra Modi’s ‘Double Engine Sarkar’ ahead of his Goa visit over rampant corruption plaguing the state. The statements were made in the presence of Goa TMC Joint Convenors Mariano Rodrigues & Samil Volvaiker and Goa TMC Media Coordinator Trajano D’Mello at a press conference held at the party office in Panaji.
Highlighting the failure of the Narendra Modi-led BJP government both at the Centre and in the state, Kirti Azad said, ‘The rule of Narendra Modi is synonymous with unemployment, price rise, and an overall deteriorating state of affairs. Under the ‘Double Engine Sarkar’, Goa’s development and prosperity have deteriorated. Narendra Modi frequents the state and peddles hollow promises only for Chief Minister Pramod Sawant to manipulate and ‘modify’ them.’ He added, ‘PM Narendra Modi, who calls himself ‘Vikaspurush,’ is nothing but ‘Satyanashpurush’ for Goa. The BJP government has ruined the state.’
Bringing to fore Chief Minister Pramod Sawant’s repeated failure to deliver good governance and release terms of references of SIT, Azad said, ‘‘The CM has blamed his government and the police department for their ineffectiveness while handling cases of land grabbing. It goes on to tell how the police would ensure justice in most cases. He further stressed, ‘The SIT was constituted for the CM’s political gains, and till date, the government has failed to release terms of references. The Sawant government is in total contradiction with its ministers, and the SIT is being used as a tool to control the land grabbers within the government. The CM claimed that he had suspended 8-9 government employees, but no one knows who they were or which department they worked in.
Speaking of people’s sufferings due to the misgovernance of the BJP government, Azad said, ‘‘Former Governor of Goa, Satyapal Malik, appointed by the BJP, made an explosive statement that the Goa Government and the Chief Minister of Goa run a corrupt government in every sphere. His statement reveals how the BJP government has failed the people of Goa.’ Adding on, he said, ‘The rampant corruption in Goa has devastated everyone. Instances of food scams are a slap on the face of Goans who are working hard to make both ends meet. Food grains were either rotting in government godowns or were being smuggled to Karnataka.
Lambasting PM Narendra Modi and Chief Minister Pramod Sawant for taking a U-turn on their Poll promises, Azad expressed his anguish and said, ‘The Double Engine Sarkar has failed to provide and protect Roti, Kapda, Makan, Swasth, Shiksha, and Berozgari. They have deceived the people of Goa by abdicating their responsibility by refusing to follow through on their promise, and now they are introducing amendments for their benefit. BJP is known for peddling hollow promises for electoral gains. Be it their Poll promise of providing 3 LPG cylinders or the Laadli Laxmi scheme. People are struggling to buy grains, and the prices of basic commodities have skyrocketed. From cooking oil to LPG cylinders, He further added, ‘The PM had promised to create more than two crore jobs every year, but the BJP has failed everyone. More than 80 crore people are living under the poverty line; if the jobs were created, people would have led a dignified life.’
Lambasting Chief Minister Pramod Sawant for their half-baked assurances and lip service to tackle the drug menace and rising cases of sex trafficking in the state, Azad remarked, ‘A state known for its beauty is now referred to as the drug capital of India. Under the BJP, Goa is perceived as a destination that promotes the consumption of drugs, sex trafficking, and criminal activities.’
At the very onset, Goa TMC condemns the recent attack on Advocate Gajanan Sawant and demands a magisterial inquiry & the immediate termination of the accused policeman.