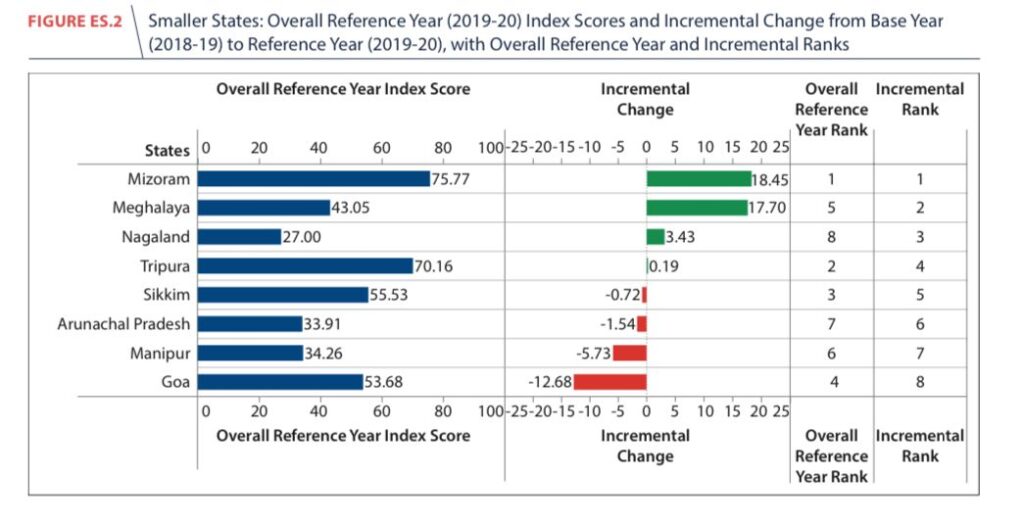 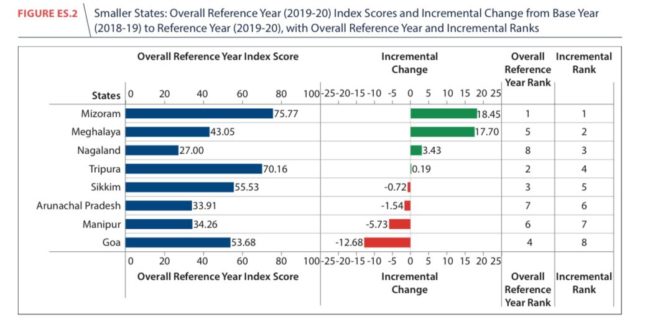 Goemkarponn desk
PANAJI: Goa is the worst-performing state according to the fourth Health Index launched by Niti Aayog.
Kerala has again emerged as the top-ranking state in terms of overall health performance among larger states, while Uttar Pradesh is the worst.
The fourth round of the Health Index took into account the period 2019-20 (reference year).
The report by the government think tank said Tamil Nadu and Telangana have emerged as the second and third best performers, respectively, on health parameters.
The report, however, added that Uttar Pradesh ranked at the top in terms of incremental performance by registering the highest incremental change from the base year (2018-19) to reference year (2019-20).
Among the smaller states, Mizoram emerged as the best performer in overall performance and incremental performance, while among UTs, Delhi and Jammu & Kashmir ranked among the bottom UTs in terms of overall emerged as the leading performer in terms of incremental performance.
Goa, with -12.68 points, has dropped down to the fourth rank from rank two previously. Goa’s incremental rank is 8. (see table)
The report has been prepared in collaboration with the Ministry of Health and Family Welfare with technical assistance from the World Bank.
The gap in the Overall Performance between the best and the worst performing Larger State and UTs narrowed in the current round of the Health Index, while it increased for the Smaller States. Among the Larger States, Kerala was at the top with the Index Score of 82.20 and Uttar Pradesh at the bottom with the Index Score of 30.57, in the Reference Year (2019-20). The gap between the best and worst-performing Larger States was 56.54 points in Base Year (2018-19), which decreased to 51.63 points in the Reference Year (2019-20).
In case of Smaller States, Mizoram was at the top with Index Score of 75.77 and Nagaland at the bottom with Index Score of 27.00. Among the Smaller States, the gap between the best and the worst performer increased from 46.40 points in the Base Year (2018-19) to 48.77 points in Reference Year (2019-20). Among the UTs, Dadra & Nagar Haveli and Daman & Diu (DH & DD) was at the top with Index Score of 66.19 and Andaman & Nicobar at the bottom with Index Score of 44.74. The gap between the best and worst performer UT decreased from 35.94 in the Base Year (2018-19) to 21.45 in Reference Year (2019-20). 7. Nearly half the states and UTs did not reach the half way mark in the Composite Overall Index Score, and despite good performance, even the top ranking states and UTs could benefit from further improvements.
The maximum Index Score that a state/UT can achieve is 100. In the case of Larger States, the highest observed Overall Index Score of 82.20 is for Kerala, followed by 72.42 for Tamil Nadu, 69.96 for Telangana and 69.95 for Andhra Pradesh which is quite a distance from the frontier (100 points).
In case of Smaller States, the Front-runner states were Mizoram with Index Score of 75.77 and Tripura with Index Score of 70.16. Among the UTs, the Front-runners were DH & DD and Chandigarh with Index Scores of 66.19 and 62.53 respectively.
This clearly indicates that there is room for improvement (to reach to the potential score of 100) for all states/UTs, including the best performing states/UTs.
There is an urgent need to accelerate efforts to narrow the performance gap between the states/UTs as 50 percent of the Larger States, 50 percent of Smaller States and 43 percent of the UTs did not even reach the halfway mark in terms of the Composite Overall Index Score.