Goans speak in one voice before CEC “SCRAP 3 LINEAR PROJECTS” 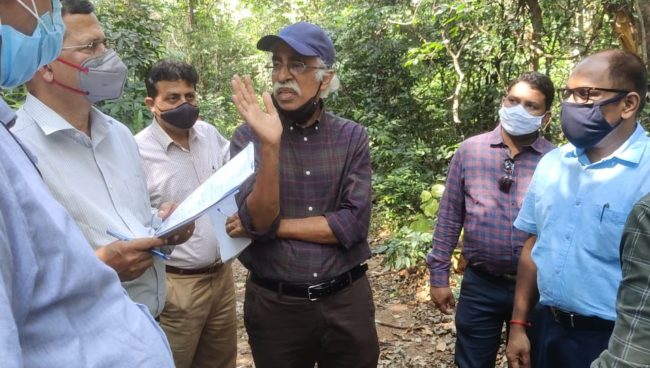 Panaji: The civil society, NGOs and the political leaders on Saturday met the Central Empowered Committee, constituted by the Supreme Court and opposed all three linear project passing through Mollem Wildlife Sanctuary.

Speaking to media, Goa Foundation’s Claude Alvares, who is the complainant in the matter, said that all people who met CEC have said that projects are not in interest of Goa and its wildlife.

“Wildlife sanctuaries are in bad state today. We have visited Mollem, Dandelim, national park, Gandhi tiger reserve and we have not found any animals there,” Alvares said.

He said that even before new projects come the existing activity has driven the animals away.

“Consider what would be the impact if we put more pressure on the wildlife sanctuaries,” he said.

Alvares said that he has not spoken anything to CEC was just facilitating the meetings with the groups and individuals.

“General message from all people who met is that no means no, these projects are of no use to Goa and please consider our representation. CEC has seen everything and they will submit report to SC and if we are not happy, we will contest that report. Generally, the CEC has supported Goa Foundation,” he said.

Alvares said that in wildlife sanctuaries animals have right of way, human beings have no right of way.

“Whatever CEC does, we have to respect, they are experienced people, the chairman was Chief Secretary of Goa for four years. He was very upset with Zuari bridge, he was saying why these elevated roads. He told me Goa is lost today,” he said.

About the government’s representations in last three days, he said, there were lots of discrepancies in their statements

“Now they say there will be no cutting of vegetation for Tamnar lines and similarly at Dudhsagar they will go through tunnel, which is totally different from what is there on the environment website,” he stated.

Porvorim MLA Rohan Khaunte said “had a meeting with the Central Empowered Committee and  have expressed my views on the three linear projects in #Mollem which would be an environmental disaster.”

Environmentalist Rajendra Kerkar stated, “Projects not in interest of wildlife in State, we oppose the three projects.”

Curtorim MLA Alexio Reginald Lourenco said that all three projects are being put in place for coal handling.

“Government is not restarting mining only to help coal handling in State,” he said.