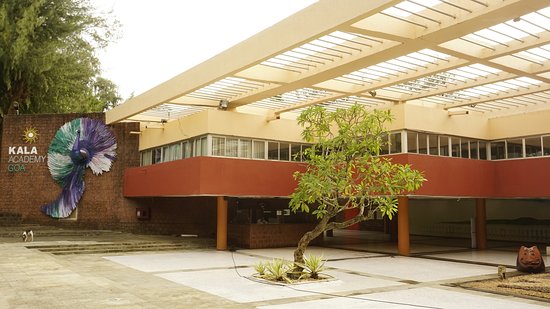 Goemkarponn desk
PANAJI: On March 15, 2021, table item number 5 was placed before the State Cabinet headed by Chief Minister Dr Pramod Sawant as a mere formality for Structural Repairs and Renovation Works (including waterproofing work, Electrical Work, HVAC External Drainage Work allied with Civil Works) of Kala Academy at a total cost Rs. 49,57,11,000/, award of work on nomination basis.
But when this government takes months to waive off digital taxi meter charges for taxi owners, which is hardly a few crores, here we have a case when they get cleared a Rs 50 cr work in just a few minutes.
When the issues came up for Cabinet on March 15, 2021, it was just cleared without any discussion on the contractor.
The meeting appears to be a farce as the issue at hand was not on the agenda of the meeting as was simply tabled during the meeting and approved without even recording the name of discussing the credentials of the contractor as though it is only this one contractor in the entire country who can undertake this herculean work order.
Such procedures for allotment of public works with public money is entirely unknown to law.
Shockingly, as per Central Vigilance Committee guidelines on tenders
clearly states that no work could be awarded without tender. Even single tenders are not entertained.
It is needless to State that tendering process or public auction is an essential requirement for the award of a contract by any Government agency as any other method, especially award of contract on nomination basis, would amount to a breach of Article 14 of the Constitution guaranteeing the right to equality, which implies right to equality to all interested parties,” CVC guidelines state.

The background of the case…
Kala Academy is a prominent cultural centre established by the Government of Goa, situated at Campal, Panaji. It is registered as a society and was started in the year February 1970. The Complex was designed by renowned Architect Charles Correa and plays the role of being an apex body to develop Music, Dance, Drama, Fine Art, Folk Art, Literature, etc., thereby promoting Goa’s cultural unity.
As the present structure is 50 years old, structural audits were carried out by Goa Government Engineering College, Gem Consultant & IIT Madras.
Directorate of Art & Culture vide letter No.DAC/ADC/Erect-Shed/KA/2020/453 dated 04/06/2020 had conveyed the approval of the government to entrust the work of structural retrofitting of Kala Academy to the Public Works Department.
Accordingly, in view of the above Public Works Department has prepared an estimate for the work of “Structural Repairs and Renovation Works (including waterproofing work, Electrical Work, HVAC External Drainage Work allied with Civil Works) of Kala Academy situated at Campal, Panaji – Goa”.
The estimate for the above work was submitted to the Directorate of Art & Culture from Executive Engineer-V, PWD vide their letter No. PWD/DIV-V(B N)/ASW/F.1/195/20-21 dated 29/10/2021 amounting to Rs.49,57,11,000/- including 7.5% Maintenance Charges, 12% GST, 1.15% RITES Charges, 18% GST on RITES Charges, 3% Contingencies & 7% Departmental Charges. Technical approval for the above work is granted by Chief Engineer-II, PWD Vide No. 1-9-05/CE-II/PWD/Vol-1/13 dated 26/10/2020.
Administrative approval was accorded by the government for the above work. Since the cost of the work is more than Rs. 2250 Lakhs, the proposal was placed before the Expenditure Finance Committee (EFC).
The work involves structural repairs & allied civil works, plumbing & Drainage Systems, Electrical Works, HVAC Works, Acoustic Works etc…
Further, as the above work pertains to structural retrofitting of Kala
Academy, PWD was to be informed about taking up the above work through specialized agencies/experts considering the scope of the work as per estimate prepared by PWD, and the work will be executed by PWD. 9. The total cost of the work is Rs.49,57,11,000/- including Contingencies,
RITES, GST, Maintenance Charges, Departmental Charges are approved by the Expenditure Finance Committee.
Since the work is of specialized nature and the work pertains to the restoration of Kala Academy Complex, a prominent structure a meeting was held by the Minister (Art & Culture)/ Chairman (Kala Academy) along with the officials of the Directorate of Art & Culture, PWD and Kala Academy. It was suggested in the meeting that the work is to be carried out on a priority basis. Since the work is of Structural Repairs and Renovation Works, it was proposed to take up the work on a Nomination basis through specialized agencies in this field only.
Accordingly, it was proposed by PWD to award this work to specialized agency M/s Techton Buildcons Pvt. Ltd. B-11, Sahar CHS, Andheri Sahar Road, Parsiwada, Andheri (East), Mumbai, who have executed similar works for PWD, Goa viz., Goa Bhavan, Mumbai.
The agency has vast experience in such works and has executed similar jobs for other State Govt. Departments. The agency is also registered with Goa PWD as a Contractor.
Since the proposal pertains to award the work on a nomination basis it is proposed to place the bid before the Council of Ministers. The work will be executed at par with the estimated cost.

RESOLUTION BEFORE THE CABINET:

The Council of Ministers may decide to award the work on a Nomination basis or through e-tender for the work of Structural Repairs, and Renovation Works (including water proofing work, Electrical Work, HVAC External Drainage Work allied with Civil Works) of Kala Academy situated at Campal, Panaji – Goa for total cost Rs. 49,57,11,000/-.
The Cabinet Note has been seen and approved by the Hon’ble Minister (Art & Culture) & Hon’ble Chief Minister to place the proposal before the Cabinet.