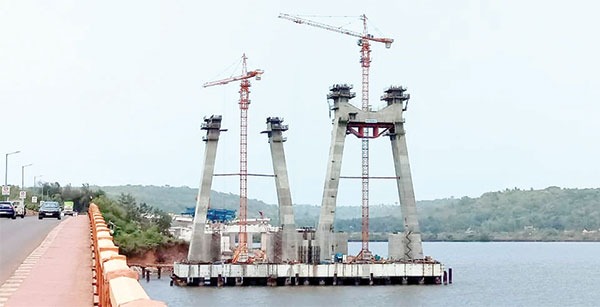 PANAJI: As expected, PWD Minister Deepak Pauskar today said that the inauguration of the new Zuari bridge will be delayed further due to technical issues.
“Government wanted to open and inaugurate one lane of Zuari bridge by December 19, but that has been pushed further due to technical issues. Fresh date will be announced soon,” said Pauskar.
He further said that the new Zuari Bridge is being worked on three packages and that the department holds a meeting to review these works every month. 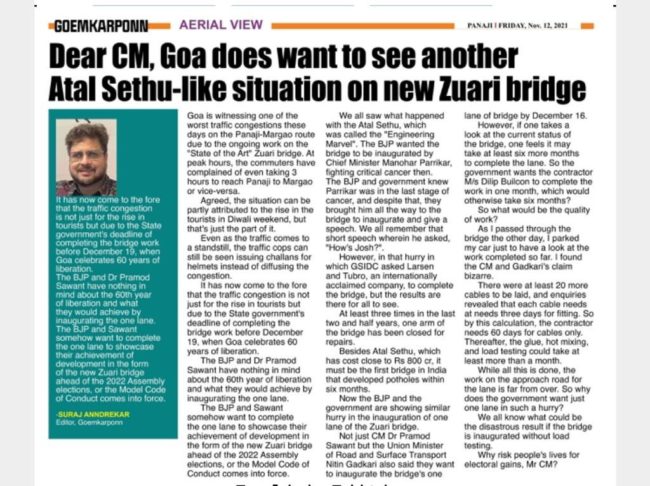 Despite 40 per cent of work still remaining on the bridge the Chief Minister Dr Pramod Sawant and the MoRTH Nitin Gadkari maintained that one lane of the bridge would be completed by December 16.
Speaking further, Pauskar said that Rs 1800 crore worth of work orders have been issued, and work shall be completed by December 31.
“The work orders have been issued for all 40 constituencies, be it roads, water pipelines and buildings,” he added.
The PWD minister said that 85 per cent of road repair works have been completed.
Speaking on Patradevi to Verna road, PWD Minister Deepak Pauskar informed that most of the work on NH66 was expected to be completed by May end this year, but due to the pandemic, it was delayed by December 19 it shall be inaugurated.
“The National Highway work from Patradevi to Verna would be completed by December 19 while the internal roads, including state highways, would be hot-mixed by December 31,” Pauskar said.
He said the rains have delayed the repair work.
“The rains are expected till November 19, and till then, we cannot go ahead with repairs as it is just a waste of money,” he said.