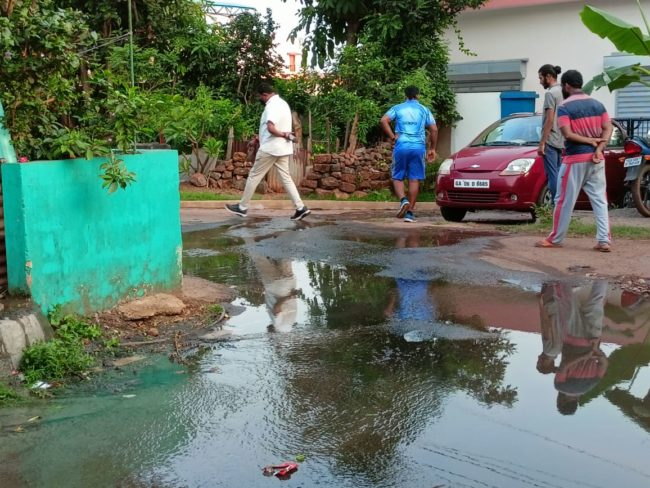 VASCO: Residents of GRB colony Headland Sada get a sigh of relief after Mormugao MLA Sankalp Amonkar, along with PWD (sewerage) section officers, held a site inspection of Overflowing Sewerage and cleared the blockages.
In the last few months, the GRB colony Headland Sada residents faced an overflowing sewerage problem.
With the monsoon approaching fast, if this situation had remained as it is, it could trigger any epidemic diseases such as Cholera, Typhoid, Malaria, Chikungunya, dysentery etc prove to be fatal for comorbid people.
Considering these health hazards, Mormugao MLA Sankalp Amonkar and the PWD(sewerage) section engineers conducted a site inspection at GRB colony.
The smelly, raw sewage water was visibly overflowing on the roads during this inspection.
When asked MLA Amonkar what he has done about this issue, Amonkar said he called up PWD engineers, did site inspection, and identified the reasons behind this sewage water overflowing. There were blockages at various points, which were cleared and now there is no sewage overflowing.
A nearby local, Ritesh, said that the foul smell of the raw sewage water was unbearable whenever they used to pass through this road.
“We were surprised for a few days thinking why the government authorities are doing nothing about it,” he said.

Athletic stadium at Bambolim to be named after late Milkha Singh

CM challenges Cong to show one good project during their tenure

Goemkarponn Desk PANAJI: The Bombay High Court at Goa has decided to consider the recommendation of the State Expert Committee on the matter pertaining to ... Read More