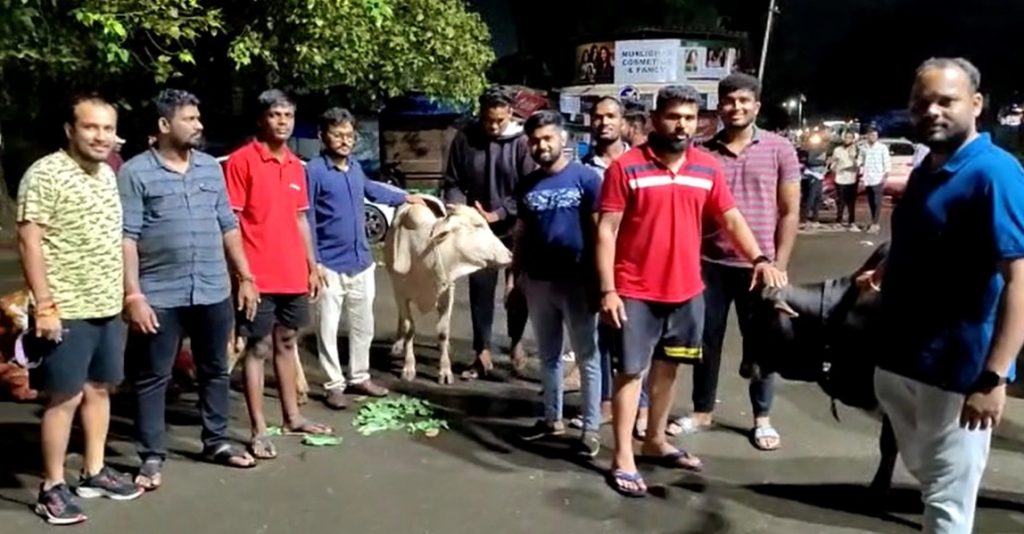 Goemkarponn desk
VASCO: Several animal lovers from various parts of Mormugao Taluka have joined hands to form a group, with a special mission to prevent road accidents and protect stray animals in the bargain.
The social workers and even Municipal Councillor (Prajay Mayekar) have now set on the unique mission of having reflector belts on the necks of stray cattle usually found on the roads at night.
On Saturday late night, the group joined hands to put reflector belts on the necks of the cattle in Vasco city and replicate the action in the suburbs like Baina, Mangor, New Vaddem, Sada and also in other parts of the entire Taluka.
The group arranged for a huge quantity of leafy vegetables and gathered the cattle at one point before carefully putting up the reflectors on their neck.
Speaking to the media, social worker Kiran Naik said that reflectors on cattle would prevent accidents at night, saving the lives of humans and animals as well.
“We have seen that many heavy vehicles move along the city route at night at high speed, and we have also seen how cattle have been injured due to accidents, and we decided to have reflectors on the neck of these animals. This will increase the visibility, and these cattle can be detected even if there is no street light along the road. This will help save the lives of animals and humans. We, animal lovers, have united to form a group and have taken several injured cattle to Dhyan Foundation on many occasions. We soon plan to have our numbers made available so that people can reach out to us in case they come across any accident involving stray cattle,” said Naik.
Naik urged people to stop causing cruelty to animals after reports suggested that some people had poured boiling water on stray cattle.
“We have seen how many cows have been found injured and suffering with excruciating pain due to people sometimes pouring boiling water or hitting them with pointed and sharp items to drive them away. This is not the right thing to do, and we also request people to apply turmeric on the wounds if anyone sees an injured cow as first aid. The people can then call us or inform the MLA office, and we will take the injured cow to Dhyan Foundation,” said Naik.
Naik also requested the Communidade bodies in Mormugao Taluka to come forward to support their Initiative.
“We have huge tracts of land available with various communidade bodies, and we would request them to allow the initialised land for the grazing of the stray cattle and if possible also make land available for setting up of a cattle pound or a “Gow shala” so that the stray cattle are off the road and the accidents are prevented,” said Naik.