Heavy rains throw life out of gear in Goa; State on red alert 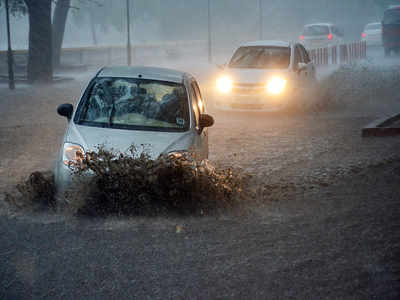 Goemkarponn desk
PANAJI: As Goa continued to receive sporadic rains on Monday, many roads and residential areas were left waterlogged. Rivers, dams, lakes were overflowing as IMD Goa urges the government to monitor the situation.
Since Sunday, the coastal State has been on red alert, with the State recording over 182.7 mm of rainfall in the last 48 hours, putting everyday life at a standstill. Monday so far has received 132 mm of rain.
The total southwest monsoon has crossed 1900mm, which is almost 23 per cent access to the expected average.
Traffic on Konkan Railway route was interrupted due to continuous heavy rain & ingress of water/slush in Old Goa Tunnel between Karmali and Thivim station in Goa state of Karwar region.
The showers that started late Saturday, July 17, continued leading to waterlogging at several locations. Major cities like Panaji, Margao, Ponda witnessed major flooding while several villages too submerged underwater.
The traffic movement was affected due to water overflowing at several locations.
With the sea continuing to remain rough, the IMD has advised fishermen not to venture into the sea.
Development of off­shore trough at mean sea level from Maharashtra coast to Karnataka coast,  East-­west shear zone, a Cyclonic circulation over south Gujarat& neighbourhood at 3.6 km height has strengthened the monsoon currents over Goa coast.
Also, a low-pressure area is likely to form over the northwest Bay of Bengal & neighbourhood around 23rd July, which is further likely to intensify the monsoon currents.
The government has prohibited the public from visiting the dams, which has crossed the danger limit. The Disaster management authorities are on alert monitoring the situation. So far, no casualty is reported.
The month of June ended with 37 inches of rain, while July has recorded 38 inches of rain.