“If No Trains Halt Here, Why Do We Need A Railway Station Here?” 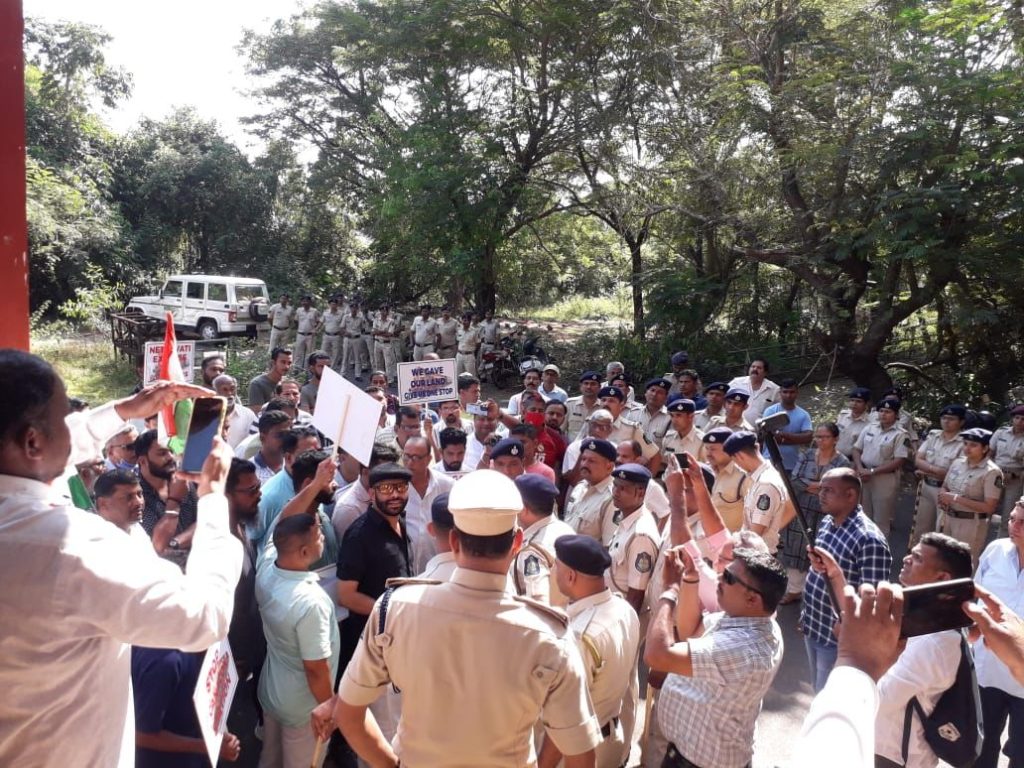 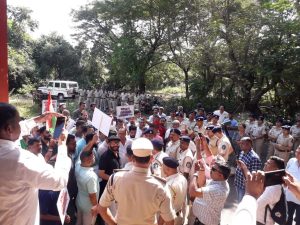 Goemkarponn desk
CANACONA: Picqued at the careless attitude of railway authorities, Canacona Senior Citizens Forum (CSCF), along with Swabhimani Jagruth Canconcars, agitated outside Canacona Railway Station to demand immediate resumption of train Halts.
Carrying placards and shouting slogans, residents assembled at Nagorcem before beginning their march to go to the Konkan Railway.
Station, only to be stopped by a strong Police force just outside the railway station.
Canacona Mamlatdar Manoj Korgaonkar, along with Dy SP Gurudas Kadam, Canacona PI Chandrakant Gawas, Konkan Railway Police Inspector Sachin Pannalkar, engaged the agitating residents for discussion and escorted KRC Karwar Region, Regional Traffic Manager Sunil Nadkar to interact with the agitating people.
The agitators, in clear terms, asked Railway Officers to explain why the Train halts were not resumed inspite of normalising the train schedule post-Covid-19 lockdown.
Sr. RTM Sunil Nadkar, however, explained that the Halts are decided by Railway Board, and moreover, due to financial unviability, the railway board has decided against Halts at Canacona Railway Station.
Nadkar, however, assured to take up the concerns of Canacona residents to the railway board authorities for a favourable response.
Agitators, angry at the response, said they are just demanding to resume the Train Halts that existed before the Covid-19 lockdown and nothing new.
Agitators were also heard shouting that people had sacrificed their lands and properties for the Railways to pass through Canacona, not to stop train Halts just because railways find it uneconomical. Canacona is a Touristic Taluka, and more than ever, people are being unnecessarily harassed and heavily inconvenienced to travel either to Margao or Karwar to board a train.
Agitators demand to give a Dateline as to when the train Halts as existing before the Covid shutdown is resumed and related facilities will be provided at Canacona KRC Station; the Sr. RTM expressed his inability to give any Dateline except assuring he will forward the demand with his report to the authorities today itself.
Some speakers blamed the government for taking the Canacona people for granted and accused the government of finishing Canacona from the Tourism point of view.
Canacona Mamlatdar Manoj Korgaonkar also demanded the railway authorities give a timeline as to the resumption of train halts at Canacona, but still, the railway officer expressed his inability to do so
Finally, the agitators declared if the train Halts do not commence latest by 5th January 2023, a mega agitation with more people will be led to the Canacona railway station.
Kamlakar Mhalshi, Ulhas Pai Bhatikar, Santosh Naik Gaonkar, Anil Bhagat, Councillor Dhiraj Naik Gaonkar, Vikas Bhagat, Janardhan Bhandari, Joseph, Vaishali Pagui, Dilkush Shet, were amongst the agitators who spoke during the agitation.