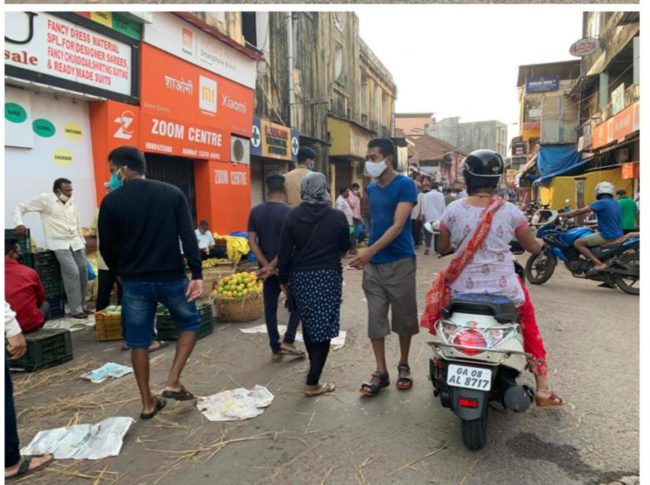 MARGAO: Even as the main SGPDA fish market remains closed due to COVID 19 protocols, the vendors are illegally conducting business at Housing Board, risking spike in COVID 19 cases.

Maulana Ibrahim, a wholesaler says they have taken every step and gave all cooperation to administration by stopping our business.

”What is going on in housing board is totally illegal. Few days back our members told me about the illegal fish sale which is going on at housing board soon we had also informed police to stop the illegal trade as to avoid the rush but don’t understand why police has not taken any action,” he said.

He said that one person by name Bobby is collecting the money from fish vehicles by saying “I will take care of the authorities and no one will stop you. I am giving hafta to the top level officers.”

Goenkarponn visited the place before sunrise and found huge rush in market violating all norms of curfew that too in police presence.

At Pimple Katta a huge wholesale fruit market is going every day Goenkarponn also noticed that only 2 police personnel were present in market.

Margao and Maina Curtorim police have turned blind eye to the violations.

After curfew was declared by state Government, SGPDA issued notice to stop wholesale fish market but the retail fish market was open.

In fact Fatorda police closed the entire SGPDA markets but the same time Margao and Maina Curtorim police gave a free hand to do business of fish and fruits in Gandhi market and other areas.

It was shocking that even a mini casino was running, which was raided by SP South and team when it came to notice of SP South when he was doing patrolling in Gandhi market area.

Goemkarponn also contacted Margao Municipality Chief officer Agnelo Fernandies who said that he has given strict orders to market inspectors and staff to follow the government order if anyone is violating them.

“All are aware about the current pandemic situation. People were demanding for lockdown to break the chain of Covid. Even after imposing curfew if still people make rush to buy fish or mangoes it’s unfortunate and above that the same is going on in presence of police is shameless,” he says.