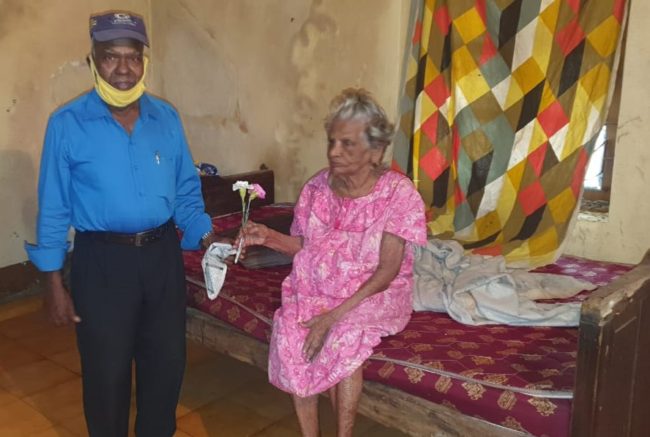 Canacona: As the world celebrated women’s day on 8th March, Inacina Fernandes fondly called Pop Inacina,
is celebrating her 100 years of living in this world and is the oldest living person in the taluka of Canacona.

She was born on 21st July 1921 and was baptised in St Anthony’s Church, Galgibagha on 13th September same year.
As she prepares to celebrate her next birthday on 21st July she fondly still remembers her colourful life from social service to politics.

Recently mamlatdar of Canacona Vimod Dalal together with his staff visited her at her residence at Sheller in Canacona to wish her on achieving the rare feat of living for hundred years.
Coming from a poor farmer’s family in Chiplem she has seen it all, from rearing cattle before marriage to social service and taking on political bigwigs in parliamentary elections.
She is best known for donating her part of land adjacent to her house to Lions club of Canacona with out charging a single pi.
Her courage to contest Parliamentary elections a couple of decades ago was much appreciated and acknowledged by one and all in Canacona.

She might have not won any elections but the courage and aura she carried always made others to take note of her whether at a function or in the market or where ever she went.
Even today inspite of her physique not allowing her to move out of her house she keeps abreast of the latest political happenings in the state from the occasional visitor who visit her to enquire her of her wellbeing.
On asked, will she be able to go to the booth to cast her vote for the upcoming municipal elections, with zeal and brilliance on her face she replied, ofcourse.

As 21st July is approaching she is preparing to celebrate her 101st birthday quietly in the darkness of her room in the  company of a family from Karwar who are her tenants and caretakers since last nine years.