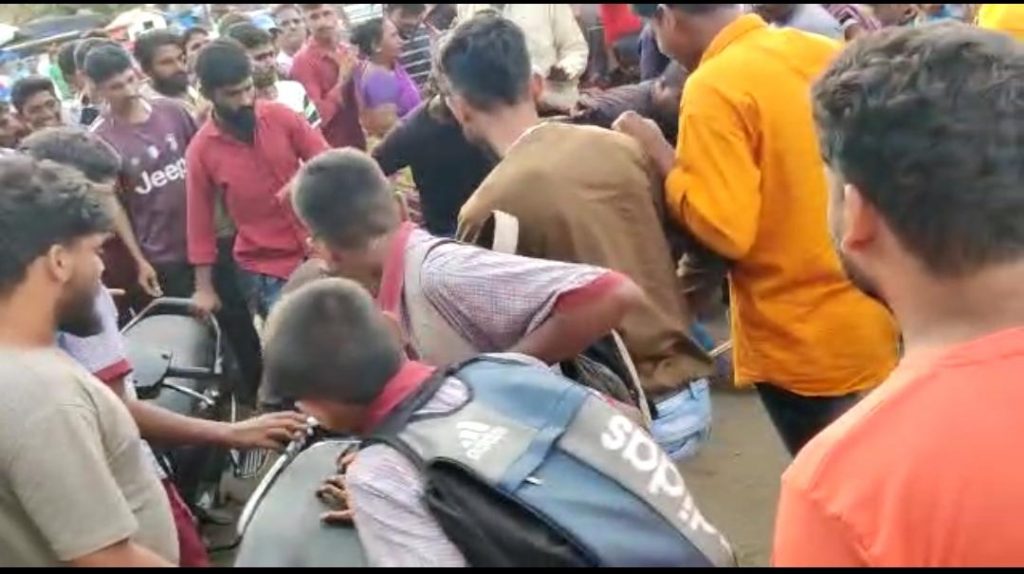 Goemkarponn desk
VASCO: An irate crowd on Tuesday evening thrashed a man allegedly attempting to kidnap a minor boy in Vasco.
According to information, the incident occurred at around 6.30 pm near the Old fish market after a man is believed to have pulled a minor boy who raised the alarm, after which a violent crowd beat the man mercilessly and handed him over to the Vasco police. The video of the incident went viral on social media, and there was an environment of fear gripping the port town with regard to minor kidnapping incidents.
Vasco PI Kapil Nayak, however, informed through a press release that the person may be mentally unstable.
“Today, one person, namely Nagendra r/o Vasco, appeared at this police station and informed that one suspected person was found kidnapping a minor boy at Kharewado Vasco, and he was caught by the public. Accordingly, PSI Rohan Nageshkar, PSI Mayur Sawant, along with HC 4824 and Robot 43 staff left at the spot to verify the same. Upon reaching the spot at Kharewado, we found the public gathered, and they were seen assaulting one suspected person wearing a black shirt, trousers and shoes. Upon looking at the police crowd who had gathered got dispersed. Conducted enquiry, and it revealed that the said suspected male person was trying to lift one minor boy, but he was rescued by the public as the minor boy shouted for help. The said suspected person and the minor boy were brought to the police station for enquiry.
Upon questioning the suspected man and he disclosed his name as Dhen Jones, age 52 yrs n/o Pondicherry. During the enquiry, he was not giving satisfactory answers and looked mentally unstable, so he did not have anyone to take proper care of. To avoid any future untoward incident, said suspected person was sent for medical examination at SDH Chicalim to examine whether he is mentally unstable or otherwise. After medical examination, the medical officer opined that he is mentally unfit and must be lodged in IPHB for further treatment.
The person will lodge after getting appropriate order from the Judicial Magistrate Vasco.” Said the press release