Is SITUATION out of control?? 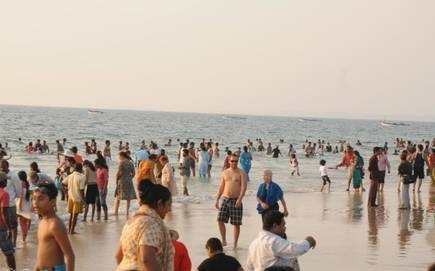 Goemkarponn desk
PANAJI: From 496 cases on February 23, Goa has reached a figure of 3597 active cases, thanks to the second wave of COVID19 in the State.
After slowing down a bit from December to February, the COVID19 is back with vengeance and has caught the authorities unawares so much so that there are no beds available in the premier hospital of Goa Medical College and South Goa District Hospital.
This has happened due to the lethargic approach of the State government and the health authorities.
Despite the cases rising in the neighbouring State of Maharashtra and Karnataka, the Health authorities thought it wise for dismantling the major COVID Care Centres at Shyama Prasad Mukherjee Stadium, ESI Hospital, Margao and the SDH Hospital, Ponda.
The authorities seemed to have felt Goa has got the herd immunity and the COVID19 second wave will not affect us.
As such, the tourists continued to flow in violating all norms, which has been a major reason for the spike.
Major towns/ tourist places account for bulk of cases:
The Major towns of Panaji, Margao, Vasco, Ponda have accounted for more than 50 percent of the active COVID19 cases in the State.
While North Goa has 1903 active cases, South Goa has 1694. The only consolation is the deaths rate continues to be low compared to national average.
Margao (339), Porvorim (367), Ponda (286), Panaji (278), Candolim (256), Cortalim 195, Mapusa (191), Vasco 171, Siolim (133), Cansaulim 120, Corlim (119) and Chimbel (101) have accounted for major active cases in State.
CM says no to lockdown again
Despite the rise in cases the Chief Minister Pramod Sawant said that there will be no lockdown in Goa as the move will disrupt the economic activities. The CM stressed upon vaccination and COVID-19 appropriate behaviour to stem the rise of coronavirus.
While announcing the decision to not impose another lockdown in the coastal state, Sawant said last year’s restrictions had the entire economy had come to a standstill.
However, the Goa CM has said that strict action will be taken against people who violate coronavirus guidelines.
CM Sawant said that the economic activities which had come to a standstill are getting revived Goa and another lockdown will disrupt them.
“There was a drop in the collection of the GST, while industries such as tourism had suffered a jolt. We want to avoid the situation,” the Goa chief minister said.
Health Minister wants lockdown:
Health Minister Vishwajit Rane said on Monday that “some restrictions” will have to be imposed in the state before the situation “goes out of hand”.
“I feel, personally as the health minister, that the time has come for us to take some steps in terms of some restrictions which will be decided by the Disaster Management Committee as per the guidelines issued by the Centre. As a state, we need to take some steps — some restrictions are required, otherwise this will go out of hand and it will be difficult for us to tackle later,” said Rane.