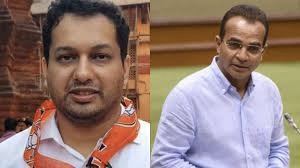 PANAJI: It’s BJP v/s BJP in Panaji, with the capital city on a path to witness the clash of the titans Babush Monserrate and Utpal Parrikar.
On the one hand, Utpal Parrikar is well-known as an educated person and, moreover, the son of the former defence minister of the country, while his rival Babush Monserrate is known for defecting from party to party and now is contesting the coming elections from the Panaji constituency on a BJP ticket.
Actually, the fight in Panaji is between BJP (Dhond) v/s BJP (Panaji).
Now the question arises whether the people of Panaji will vote for Parrikar legacy or go with Monserrate, and it is also a matter of time whether Babush will give checkmate to Utpal Parrikar in Panaji, which was a bastion for Late Manohar Parrikar.
The high voltage in Panaji is changing day by day. When Utpal announced that he would leave the BJP and enter the fray, the people who raised their eyebrows today were looking forward to this glorious battle.
Shiv Sena withdrew its candidate, and former mayor Uday Madkaikar has added fuel to the fire by supporting Utpal instead of the Congress candidate from Panaji.
The TMC-MGP alliance also are supporting Utpal in Panaji.
Although Babush has a good relationship with the Panaji voters, the feeling of injustice done to Parrikar’s son Utpal is becoming more and more influential here. The battle between the two made Congress feel like it was sitting in the back seat.
Seeing the growing response in Panaji at present, it seems that Babush will not reach the ‘danger zone. Since Babush is an ‘old player’, he also knows how to change the equations. Despite this, it seems that this election will not be easy for Babush.
Interestingly, Babush has failed to keep up his promise made to teh people of Panaji of moving out off-shore casinos from River Mandovi, and so also he has been unable to provide jobs for the youth in the city.
However, all said and done, Babush has become a master in winning elections since 2001, and it will be interesting to see how a novice like Utpal takes on the challenge.
In fact, it is said that the fight is not between Babush and Utpal but between Babush and the late Manohar Parrikar.
When Manohar Parrikar was alive, he never got into a fight with Babush. In Panaji, it was often said that he had ‘great’ relations with Babush. But now that Utpal has started challenging Babush after his death, many Parrikar loyalists have shifted side to Utpal.
And now, Babush has to change his strategy.
Panaji has Catholic and Hindu votes, and some of the Catholic votes may also go to Utpal.
This has put a huge question mark on the challenge Congressman Elvis Gomes, who was banking on Catholic or Congress votes, which is around 5000 in Panaji.
Further, Valmiki Naik, who is in the fray of the Aam Aadmi Party, is well known as Panajikar’s well-known candidate. He is well acquainted with the voters as he has contested in 2017 and later 2019. In 2017, he received more than 2,000 votes.
However, given the keen fight between Babush and Utpal, it is unlikely he would make much of an impact.
There are indications that the result of the Panaji constituency could be a point for the whole country, not just for Goa.