JAIL, LATHICHARGE – Are we in a state of DICTATORSHIP? 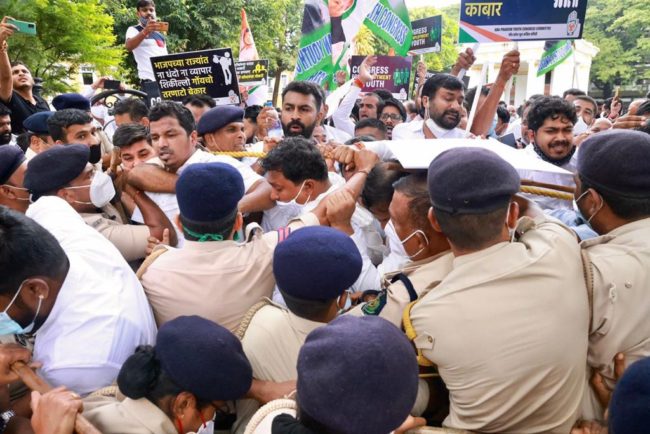 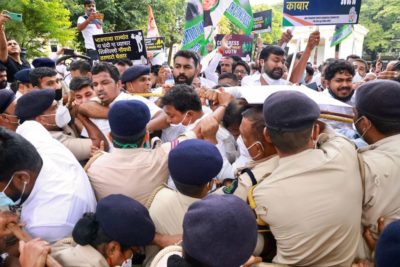 “If you cannot answer questions of the locals who have voted for you. Please refrain from visiting the village and having public meetings.”

Goemakrponn desk
PANAJI: In the last two days, Chief Minister Dr Pramod Sawant seems to be in an absolutely unrelenting mood as he has made every attempt to suppress the protest against him.
In the last two days, the chief minister’s Home Department has jailed seven Revolutionary Goans members and the very next day, the Youth Congress leaders being lathi-charged. Now the netizens are asking whether it would be tear gas or firing next?
First, the seven Revolutionary Goans at Shiroda were jailed for questioning the Chief Minister over teh issue of unemployment. The seven RG members were jailed the entire night and remanded to judicial custody but were released later on bail.
On Tuesday, the Indian Youth Congress protested against the Goa government over rising inflation, petrol diesel, domestic gas cylinder prices, and rising unemployment.
The police lathi-charged the youth who were fighting for their rights.
The police actions in the last two days indicate that every voice against the Dr Pramod Sawant government would be suppressed with Brute Power.
In the last two and half years, the Sawant government has met with several protests, and every time, there has been an attempt to suppress the voices.
In fact, this is the second lathi charge during his term. The first being on the Shel Melauli villagers, who were fighting to save their land from being usurped for IIT Goa.
Sawant government has also seen several protests over the three linear projects in Mollem and anti-coal movements. Hundreds have been detained and slapped with cases in those protests.
“The Goa Police brutally lathi-charged the members of the Youth Congress and then arrested many members, but the Youth Congress is not going to back down from such use of force. Indian Youth Congress will continue to raise its voice against the government’s corrupt policies,” said the Indian Youth Congress National Media In-charge Rahul Rao.
On the other hand, the Revolutionary Goans leader, Vishvesh Naik, said that the boys’ detention was an attempt to silence the voice of the mass. “If you cannot answer questions of the locals who have voted for you. Please refrain from visiting the village and having public meetings,” said Naik.
The seven RG members from Ponda were detained for questioning the local MLA and CM during a programme. They only raised questions about ‘jobs’ and ‘roads’. On seeing the duo addressing the gathering failing to give relevant replies as a mark of protest, they began to shout ‘Uzzo’, which resulted in them being detained, Naik said.
“Shame on @BJP4Goa Government for brutal Lathicharge on @IYC
President @srinivasiyc & @IYCGoa President @varadmardolkar
& other Functionaries while protesting against Failures of @DrPramodPSawant Government to provide employment & control inflation,” tweeted Leader of Opposition Digambar Kamat.
Aam Aadmi Party Goa Convenor Rahul Mhambre also questioned Sawant on the arrests of RG members.
“Be it Maulingue, Shiroda or any place across Goa, pplThe arrested up of
@BJP4Goa Govt. Questions will be asked, Qs will have to b answered by
@goacm. Arrest of youth for asking the question is uncalled for n unacceptable. CM bab answer Qs instead of using cops to shield ur incompetency,” he said.