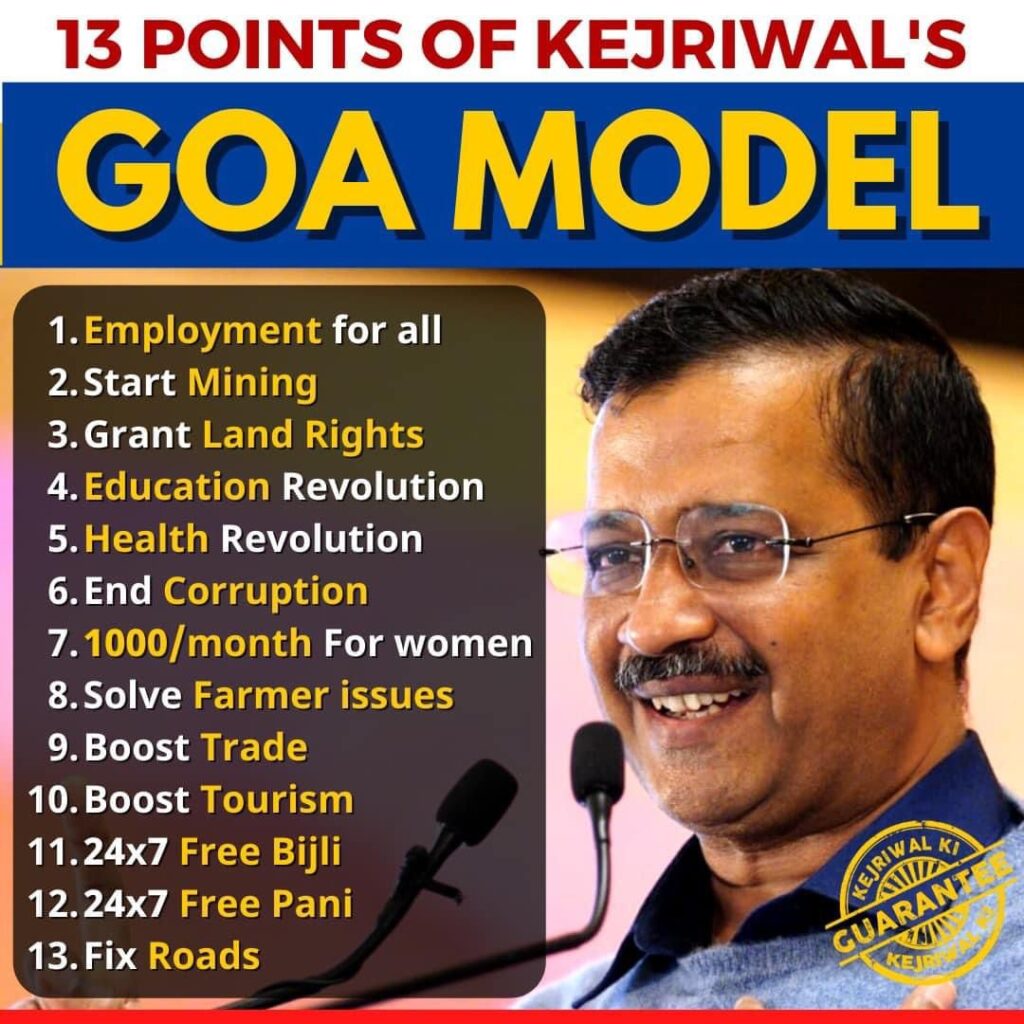 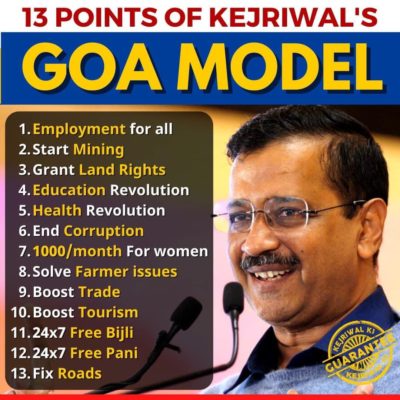 PANAJI: On Sunday, Aam Aadmi Party (AAP) national convener and Delhi CM Arvind Kejriwal unveiled his party’s ’13-point Goa Model’ ahead of the state assembly elections.
Kejriwal said If AAP forms the government, then every Goan family will benefit 10 lakh over five years.
Spelling out details about his ‘Goa Model’, Kejriwal said it will have a 13-point agenda which will include providing jobs for the Goan youth. He said, “Upon gaining power, AAP will provide government jobs on a merit basis, as well as unemployment allowance of Rs. 3000 each until they find work”.
Moreover, he promised that mining would be restarted within six months, and land rights would be resolved within the same timeframe if his party won office.
Among other agenda, points are enhancing the condition of state-run schools, providing free education to all Goans, and improving hospitals in the state.
“Today in Goa, there is only one government hospital, the GMC and the primary health centres are practically non-existent. We plan to build mohalla clinics in every ward and provide free medical services to all Goans”, he added.
He went on to say that AAP will be the first party to provide the first corruption-free government in the state and that women above 18 years of age will be given Rs. 1000 per month.
“All issues of farmers will be resolved while a “raid raj” and “corruption” will be eliminated and a congenial atmosphere will be created for trade and industry to flourish”, he added.
Furthermore, he stated that “Goa is an international destination for tourism. We will strive to develop the state’s tourism industry in accordance with international standards”. Kejriwal also announced free 24-hour electricity, an uninterrupted water supply, and the building of good roads throughout the state.
He said, “When AAP forms government, we will create a new Goa, one that is prosperous and that usher in growth without destroying Goa’s past”.
If AAP forms the government, then every Goan family will benefit 10 lakh over five years.
“Assuming a family receives an Rs. 500 electricity bill every month, which equates to a yearly bill of Rs. 6000. When AAP makes electricity-free, this amount will be saved. With the AAP’s unemployment allowance of Rs. 3,000 per month, a family will receive Rs. 36,000 annually. AAP will provide Rs. 1000 per month to women over 18 years old. If there are two women in the family, then they will receive Rs. 24,000 per year. Our estimates suggest that each family spends approximately 40-50 thousand rupees on health-related issues. AAP aims to provide free health services in the state, so each family can save upward of 40-50 thousand each year. Similarly, we will also provide free education. If a family has two children and education costs 3000 per month for a single child, once AAP comes to power, 72,000 will be saved. If we calculate all this, each family will receive the benefit of two lakh rupees annually, which is equal to 10 lakh in five years”, he added.
Further, he said, “Now the voters have to decide whether or not they want to fall prey to Rs.5000 before elections or vote for an honest party which will give them a benefit of 10 lakh in five years”.