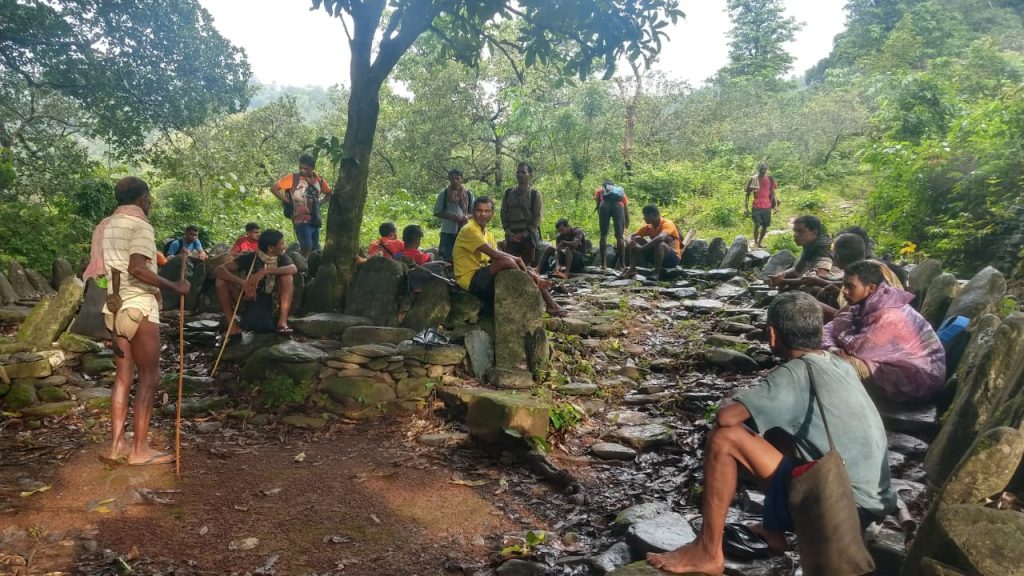 Goemkarponn desk
CANACONA – The villagers of Khotigao have demanded that the government declare the heritage ‘Kosambakadem’, Boskai (Meeting -Seats), a traditional Meeting-Point of the villagers at Baddem, a Protected Site of the State.
The Meeting-Seats set (locally called ‘Boskai’) is located at Kosambakadem (near Kosamba Tree) amidst the thick forests at Baddem in Khotigao village has natural stone-curved Chairs and Benches, and locals occasionally or whenever the need arises, meet at the venue to discuss the good or bad that comes or befalls on the villagers.
Devidas Gaonkar, an environmentalist, tribal and social activist, writer and poet, was recently selected by Govt of India’s Centre for Cultural Resources and Training under the Junior Research Fellowship Scheme for Research work on the Dhillo festival, traditionally celebrated by Tribal communities in remote areas of Canacona, Sanguem and Quepem taluka’s.
Gaonkar, himself a resident of Baddem in Khotigao had moved a proposal and got the resolution passed at the recently held Gramsabha of Khotigao urging the government to declare Kosambakadem a Protected Site.
According to Gaonkar, the site has very rich importance in the lives of the indigenous community of Khotigao. ‘ There is a huge Kosamba Tree near this place, and hence the place is called ‘Kosambakadem’, and since the village elders, as well as youngsters and also the women folks, meet at this place for whatever Good or Bad, and in accordance to the villager’s style, the meetings held at this place are called ‘Boskai’ which means a Meeting -Seats Set’.
Gaonkar further informed that ‘ We make use of this place, whenever something good happening or bad developments takes place, and villagers had to investigate, deliberate or discuss, all the people assemble here and take up the issue. Whenever such necessity occurs in the village, the village ‘Gaonkar’ asks village ‘Velip’ to give a call-out/announcement for the meeting, and the Velip comes to the centre and Call-out to the villagers. After which, the villagers attend the Boskai at Kosambakadem, discusses, deliberates and whatever decision has to be taken is done at this place.’.
Besides, there are no limitations as to how many or only specific ‘Sittings/Meetings’ should be held, but whenever some things need to be done, or something bad happens, or even something worst situation comes in the village, whatever needs to be done in such circumstances, that time Meets/Boskai takes place ‘.
Secondly, we have a subsistence lifestyle in our village of an ethnic tradition of ‘Bonvdi’ ( Hunter-Gatherer Culture). Whenever Boskai is scheduled, the hunters first gather at Kosambakadem and then proceed’.
Gaonkar also explained yet another traditional ethnic practice at Kosambakadem,’ when a woman delivers a child, especially a Male child, the mother remains quarantined for three months in her house and gets free from quarantine only after five women/wives of the main villagers (locally called Maneli) brings the child at Kosambakadem, cuts few of the three months old child’s hair, and offer the same to God at Kosambakadem. Along with this ritual, the home quarantine of the child’s mother gets over, and she gets free from all the self-imposed restrictions and enabling her to go out of her house.