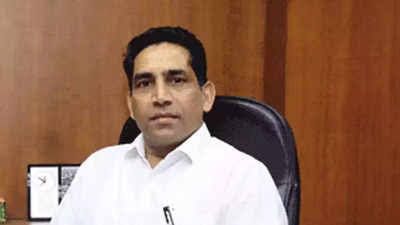 Goemakarponn desk
PANAJI: BJP Goa State President Sadanand Shet Tanavade today informed that he has invited Priol MLA Govind Gaude to join the BJP while assuring him a ticket for the upcoming elections in Feb 2022.
“We have invited Independent MLA from Priol to join the party; if he is ready to join the party, we will consider his candidature from Priol constituency; I am also 100 per cent sure that the block Mandal will support this decision,” said Tanavade.
He further said that the block Mandal will support this decision and take the party forward.
However, Priol Block, which held a meeting with Tanavade, have expressed dissatisfaction over inducing Gaude into the party. The Block Mandal has also threatened to field BJP karyakarta as an independent in 2022.
“We do not want Gaude to be inducted into the party; we have submitted a letter to BJP president to consider Sandeep Nigalye’s candidature for the upcoming elections. If BJP fails to consider our demands, we will be forced to field an independent candidate against them,” Priol BJP Mandal said after meeting BJP President.
Around six months ago, Gaude had expressed his willingness to join BJP, but at the time, the party didn’t react to his statement.
Tanavade said, “Gaude is in alliance with BJP and will join the party before the election.”
Earlier, while BJP was in talks with MGP, hoping to forge a pre-poll alliance, it was silent on Gaude. The talks involved BJP offering MGP around six seats, one of them being Gaude’s Priol. MGP president Pandurang Dhavalikar had announced his plans to contest from the constituency.