LOOT-US…??? BJP’s ‘One Family, One Ticket’ policy goes for a toss in Goa as Rane’s, Monseratte’s get 2 tickets 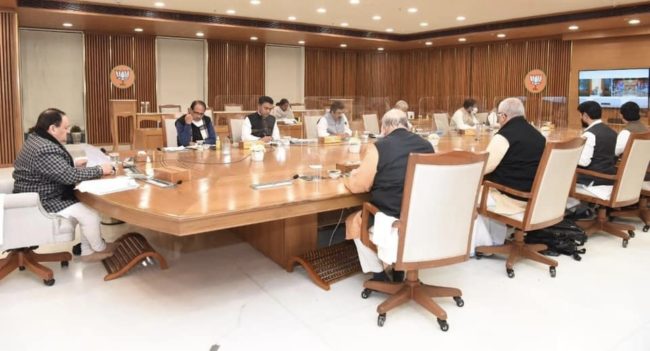 PANAJI: Faced with anti-incumbency and pressure from its cadres, BJP has done a tight-rope walk as it announced the names of 34 candidates for the upcoming Goa Assembly elections scheduled on February 14. However, as against its “One Family, One Ticket” policy, the saffron party has promoted Family Raj by giving the Monserratte and Rane couple tickets.
While BJP dropped two ministers – WRD minister Filipe Nery Rodrigues and PWD minister Deepak Prabhu Pauskar and MLA Isidore Fernandes– it also announced candidature to Milind Naik from Mormugao, who had resigned as minister over the alleged sex scandal case. Party has given a ticket to 15 sitting MLAs, including eight, who had switched their sides from Congress and MGP to join BJP in 2019.
Interestingly, the name of Utpal Parrikar, the son of the late chief minister and defence minister Manohar Parrikar, was not on the list that was released today. This may be noted that there was a standoff between the BJP’s leadership and Utpal Parrikar over the latter’s demand for a ticket for the Panaji Assembly seat, which was held by his father since 1994.
As per the official list, BJP has fielded Chief Minister Dr Pramod Sawant from Sanquelim, Deputy CM Chandrakant Kavlekar in Quepem and Deputy CM Manohar Ajgaonkar from Margao, as against his Traditional Pernem constituency. 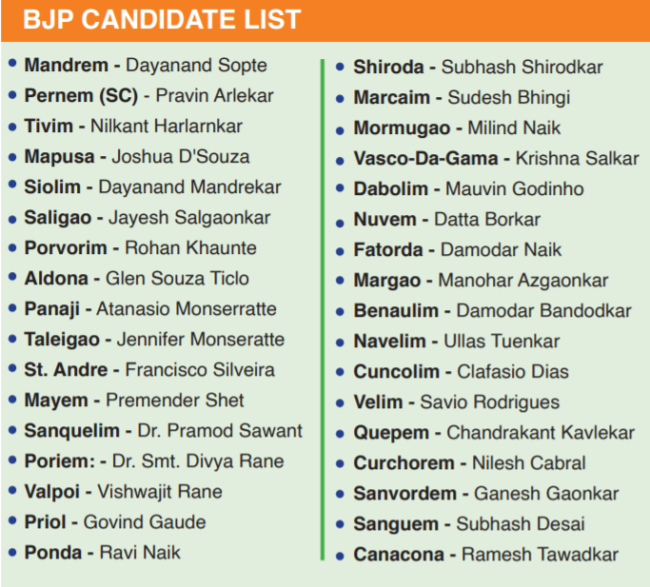 The elections for the 40-member Goa Assembly will be held in single-phase on February 14. BJP has not announced candidature in Calangute, St Cruz, Bicholim, Cumbharjua, Cortalim and Curtorim assembly seats.
Health Minister Vishwajit Rane has managed to get a ticket to his wife Divya from the Poriem assembly constituency currently held by her father in law. Poriem has been a stronghold of Congress’ Pratapsingh Rane since the 70’s.
Also, sitting Minister Jennifer Monserrate (Taleigao) and her husband Atanasio’Babush’ Monserratte (Panaji) are also on the list.
At the same time, the party denied the ticket to DyCM Chandrakant Kavlekar’s wife, Savitri, in Sanguem. She had been campaigning in the constituency since 2019 after she resigned from Congress along with her husband to join the saffron forces.
BJP old caders, including ex-Minister Ramesh Tawadkar (Canacona) and former MLAs Subhash Faldesai (Sanguem) and Ganesh Gaonkar (Sanvordem), have re-entered in the battlefield. BJP denied tickets to sitting Minister Deepak Pauskar and MLA Isidore Fernandes to accommodate them.
Even Ex-Minister Dayanand Mandrekar (Siolim), Neelkanth Halankar (Thivim) Damodar Naik (Fatorda), who all had lost 2017 polls, have managed to get party tickets once again.
Ex MLAs who joined BJP recently – Ravi Naik (Ponda), Jayesh Salgaonkar (Saligao), Rohan Khaunte (Porvorim) and Govind Gaude (Priol) are in the list.
Meanwhile, the newly inducted members like Daji Salkar (Vasco), Arlekar (Pernem), Premanand Shet (Mayem) have got the ticket.