Lost by a vote and the victory by 13; what a turnaround for Ravi Naik… 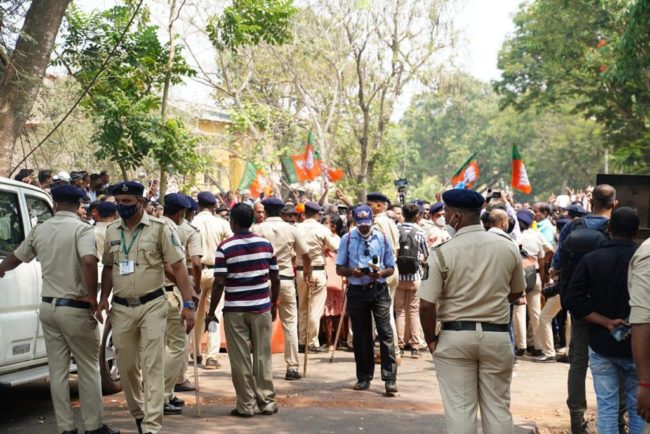 PONDA: After the election, no change in MLAs in Ponda Taluka, but after the toughest battle with MGP, finally BJP managed to bloom lotus first time in Ponda. Similarly, in 15 years, BJP has won in Priol.
In the case of Shiroda and Marcaim Subash, Shirodkar of BJP and Marcaim Sudin Dhavlikar of MGP were leading till the end.
However, in the case of Ponda and Priol, it was an intriguing battle till the end. MGP’s Dr Ketan Bhatikar had taken the lead in votes in every round, while Rajesh Verenkar of Congress party was in the second position and Ravi Naik in third place.
However, in the final round, Ravi took the lead over MGP Dr Ketan Bhatikar, almost like hitting six of the last ball to win the game and thus, Ravi Naik bloomed the lotus for the first time BJP Ponda.
Ravi lost by one vote but asked for recounting, and in that, he emerged victorious with just 13 votes.
BJP had never won the Ponda seat before, and this is the first time after Congress MLA resigned and joined them to contest the seat on BJP.
Similar was the case with the MGP-BJP battle at Priol. This battle, too, was exciting. Deepak Dhavlikar, too, was leading; however, in the final round, BJP Govind Gaude managed to get the lead and win the seat.
Govind Gaude also maintained the record of winning the seat twice in Priol. Earlier, ever since the formation of Priol Constituency in 1994, Dr Kashinath Zalmi won two consecutive elections, then Adv. Vishwas Satarkar, later MGP Deepak Dhavlikar twice, and now Govind Gaude won the second time.
The first time he won as independent, and the second time, he won contesting on BJP ticket.
In the case of Marcaim, Sudin Dhavlikar won the seat but could not maintain the highest winning margin from Marcaim.

Goemkarponn desk CURCHOREM: The Mahararashtrawadi Gomatak Party (MGP) on Sunday said that it would contest 18 out of 40 seats in the forthcoming Assembly polls, ... Read More

PC predicts “whoever wins in Goa will win LS polls”

Goemkarponn desk PANAJI: AICC Senior Goa Election Incharge P Chidambaram today said that Goa is not any colony that will be colonized by some political ... Read More

NEWER POSTPeople have given us a clear mandate: Fadnavis
OLDER POSTIt was very challenging for me: CM Sawant