Marcaim farmers in distress after a breach in Bandhara demand compensation

Goemkarponn desk
PONDA: The Farmers attached to Kul Sangatan Bar AmreKhajan Tenant Association at Marcaim complained that due to a breach in Bandhara, the entire khajan paddy land is submerged under the saline water of Kumbarzuve-Cortalim canal.
They said that all farmers had ploughed their land for paddy cultivation. However, all their hard work went in vain as for the past fifteen days, their paddy fields have been underwater, and they cannot cultivate Vaigan Crop (rabi). If this situation continued, it would also be difficult to take Kharif crops in monsoons.
They said due to very high tide, the bandhara is breached, and it is widening further.
Farmers said that if the bandhara is not repaired and restored, then farmers fear that the Khajan land will turn infertile land. 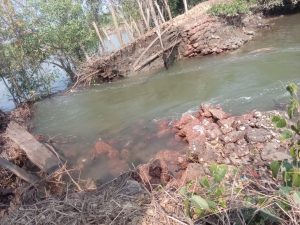 The women said some farmers had cultivated vegetables, but they were affected by saline water. The farmers demanded that the government repair the Bandhara and even pay them compensation towards damage to their fields due to the breach in Bandhara.
RG Leader Premanand Gaude said this is one of the biggest khajan lands in Asia.
He said the farmers are suffering because Farmer’s Committee failed to look after maintenance work.
He said farmers have long requested the Mamlatdar to protect their fields. However, there is no concrete solution to the problem.

He said the tenure of the Committee looking after Khajan land is for three years; however, the same old Committee has been looking into the affairs for the past five years.
He said that to find a solution, the farmers have called an urgent meeting at Marcaim on coming Sunday and that Mamlatdar and all stakeholders are urged to attend the meeting so that issue is discussed to arrive at a solution.