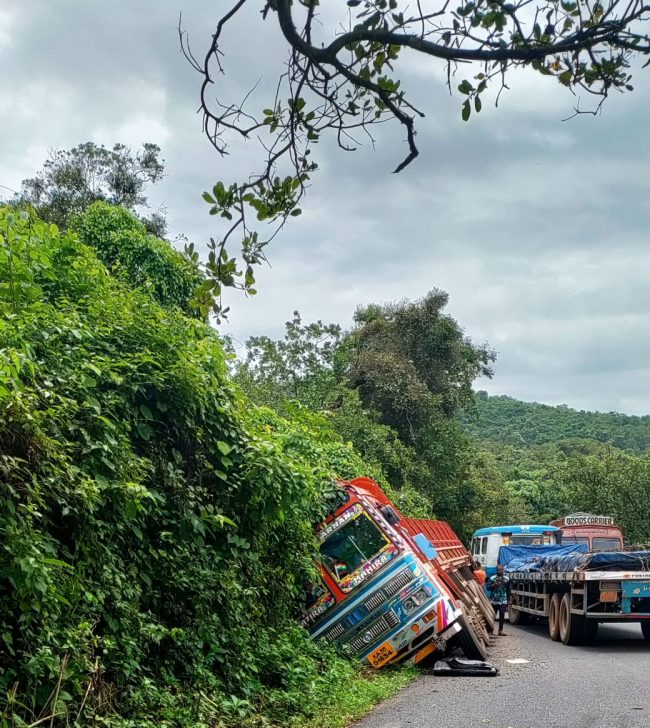 Goemkarponn desk
CANACONA – A truck carrying mining material fell into the roadside drainage, causing traffic congestion on NH-66 throughout Thursday.
Traffic was halted for a prolonged time as two Cranes were engaged to remove truck No.KA-35 D-1634 fell into the roadside trench (drainage) on the NH-66 road on its right-hand side while driving across another truck that lay broken down on the left-hand side of the highway.

According to sources, earlier in the wee hours, a truck loaded with steel bars and headed towards Canacona/Karwar got brokedown and halted on the left-hand side of the road towards Canacona. While the Karnataka registration mining balls carrying truck, in an attempt to cross -over to bypass the already stranded truck, strayed too much to its right and fell off into the roadside gorge, almost turning turtle and most of the mining balls falling off.
Throughout Thursday, highway traffic was cautiously running, with traffic personnel regulating the vehicles alternatively on either side (towards Margao and Vice-versa.
By Thursday evening, two different Cranes were engaged first to move- out the already stranded steel rods carrying truck at little ahead, while the fallen down truck was lifted back on the road and moved back to the station if the roadside. However, during the entire process, traffic was alternatively halted for several hours, and police personnel tried their best to regulate the delayed traffic flow on NH-66 road.