My father has had his innings & his sympathies are no longer with Chodankar: Vishwajit 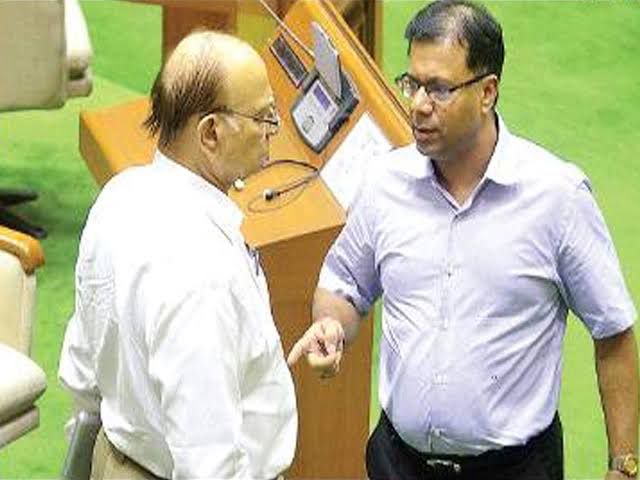 Goemkarponn desk
PANAJI: Health Minister and BJP MLA Vishwajit Rane today said that his father Pratapsingh Rane has had his inning and his sympathies are no longer with the GPCC President Girish Chodankar.
“My father Pratapsingh Rane has had his inning, and his sympathies are no longer with you, Girish Chodankar. Today leaders are quitting the Congress that show there is no faith in your leadership,” said Rane.
He further said that with Reginaldo quitting the party, Chodankars leadership is questionable as Congress is slowly getting eradicated from the state.
Reacting to Girish’s allegations on SEZ scam, Rane rubbished the claims saying that he would file a Rs 100 cr defamation case against the Congress President.
“Whatever allegations made by GPCC President are baseless, and I will file defamation case of Rs 110 cr against Chodankar if he does not issue an apology within the next 48 hours,” he added.
Rane said that he is ready to give any file pertaining to the matter, and he himself is ready to start an inquiry into the matter based on his inputs.
“You are a National Party president and should refrain from saying such comments. Maximum scams have happened during the Congress party, and that is why the party has been reduced to 9 then,” he said.
Chodankar yesterday had demanded Prime Minister Narendra Modi initiate an inquiry into the multi-crore scam by Goa Industrial Development Corporation who violated RERA, TCP and IDC regulations while auctioning repossessed SEZ plots which were auctioned some days back by GIDC.
Chodankar said that while allotting the plots Minister Viswajit Rane and IDC Chairman Glan Ticlo collected Rs 2000 to Rs. 6000 per sq meter more than the actual rate per square meter of the plots depending on the area of the plot as a bribe.
“In this multi-crore scam, Industries Minister Viswajit Rane and IDC chairman Glen Ticlo are involved in it. And they have done blatant irregularities, and we are in possession of all documents to prove it, GPCC president had said.

Goemkarponn Desk PANAJI: Chief Minister Dr Pramod Sawant today informed that decision on mining corporation has already been taken and that the file in this ... Read More

NEWER POSTNavelim constituency yet to get cracking on solution for roadside dumping: Pratima
OLDER POSTFishing Corporation in Goa yet to see light of the day: GFBOA