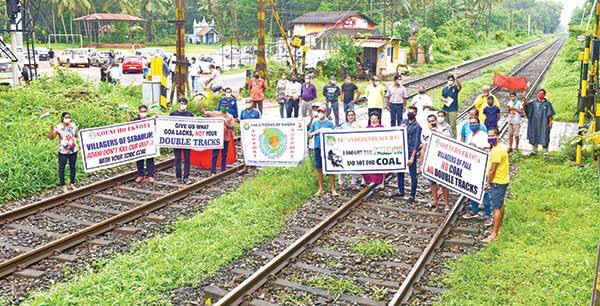 PANAJI: In a major victory for the people, the Supreme Court of India today has upheld the CEC recommendations for cancelling the railway double-tracking project.
The SC also has set aside the clearance granted for the project by the NBWL.
“SC today has upheld the CEC recommendations for cancelling the railway doubling project and set aside the crucial clearance granted to it by the NBWL. It has allowed the railways to reapply. The biggest defeat for the railways in a long time. A tribute to the Amchem Mollem campaign created and sustained by people of the coming generation,” said Goa Foundation Director Claude Alvares.
“Supreme Court has affirmed CEC recommendation on double railway tracking and cancelled NBWL clearance granted for the project,” he said.
Alvares said that the Supreme Court has directed the South Western railways to reapply for the same.
The Central Empowered Committee appointed by the Supreme Court of India said it does not find any justification for undertaking the Indian Railways’ rail double-tracking project in Goa, which is being opposed by environmental experts.
In its report to the Supreme Court, the CEC had also recommended the cancellation of the entire segment of the South Western Railway doubling from Tinai Ghat to Vasco, which was granted approval by the National Board of Wildlife’s (NBWL) standing committee.
“CEC does not find any justification for undertaking a project of this nature which will destroy the fragile eco-system of the Western Ghats, which is an internationally recognised biodiversity hotspot and also one of the most important wildlife corridors of the country,” reads the CEC report
On April 8, the Apex Court accepted CEC’s recommendation that the Tamnar 440KV power line is set up along the alignment of the existing power line so that fresh forest areas are not disturbed.