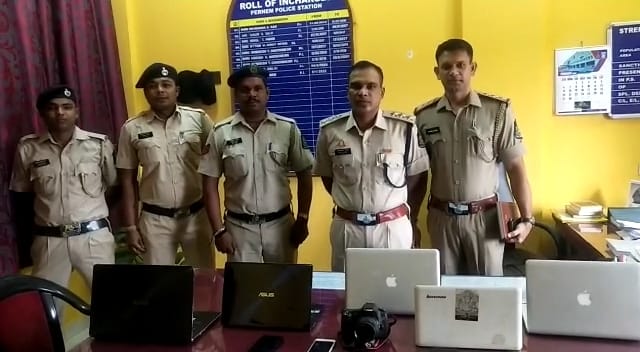 PANAJI: Pernem police have seized Rs 10 lakh worth of stolen goods and arrested two persons who targeted foreign tourists in the coastal areas of Ashvem, Morjim Mandrem and Harmal for the last two months.
Incidents of large scale theft from various places in the area were reported to Pedne police station.
Police were investigating the suspects. The suspect, identified as Latif Khan, 28, of Mysore, Karnataka, and K.P. S. Aziz K Sadu, 46, of Kodagu Karnataka, has been arrested, and Rs 10 lakh has been confiscated from him.
The suspects targeted foreign and Indian tourists and stole valuables like their laptops.
The suspects had created an atmosphere of fear among the tourists by stealing them from their stomachs, mobile phones, cash, etc. and evaded police by changing their locations.
The Pernem police found out that the suspect was from Kerala and Karnataka during the investigation.
Earlier, Rs 25 lakh was seized from the same suspect, said Superintendent of Police Sudesh Naik and Inspector Vikram Naik.

Goemkarponn desk PONDA: One month after the election for Board of Directors (BoDs) for Goa Dairy was held, and results were announced, the Election for ... Read More

Porvorim: Porvorim MLA Rohan Khaunte in a representation to State government including Panchayat and Town and Country Planning ministers have demanded action in connection with ... Read More

20 rescues on beaches during Diwali weekend

Goemkarponn desk CALANGUTE: With tourism opening up once again after COVID19, Goa has seen an influx of Goan tourists off late. However, as we all ... Read More