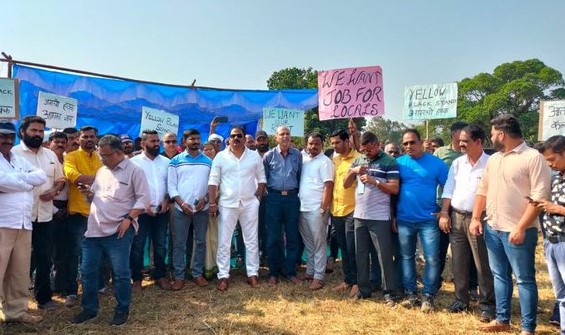 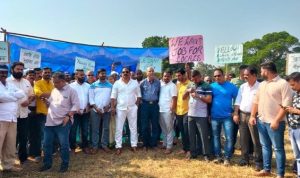 Goemkarponn desk
NAGZAR: Pernem-based taxi operators today came down on the streets and protested against the state government, demanding a black and yellow taxi counter at the Mopa International Airport.
Greenfield Mopa Airport Taxi Association, Mopa Airport Local Taxi Association and Mopa Airport Taxi Association alleged that the State government is trying to create a divide between the taxi owners from Pernem and Mopa.
“We will stick to their demands of opposing the app and continue batting for the counter for yellow-black taxis at Mopa airport. Government has failed to protect the people’s interests,’ the taxi operators said.
They further said that the Goa government would introduce an app-based taxi service by taking all the stakeholders into confidence, but we do not want app-based taxi service.
“We will not allow app-based service. If app-based taxi service is introduced, taxi operators from across Goa will come there,” they stated.
The taxi operators said that while buying the land, former CM Parrikar had promised them jobs and business opportunities, but as soon as they got the land, they sold it to GMR.
“Today, we are deprived of our own rights. The state government has forced us to take this decision to go on protest.”
The locals said that the government is only creating confusion amongst the taxi owners over the operation of taxis at the new airport by releasing advertisements for registration of taxis with GTDC as well as making statements about app-based taxis.
“There is no clarity over transportation facilities which will be made available at this airport as well as ignoring their demand of having a yellow-black taxi counter as per the Motor Vehicle Act,” they added.