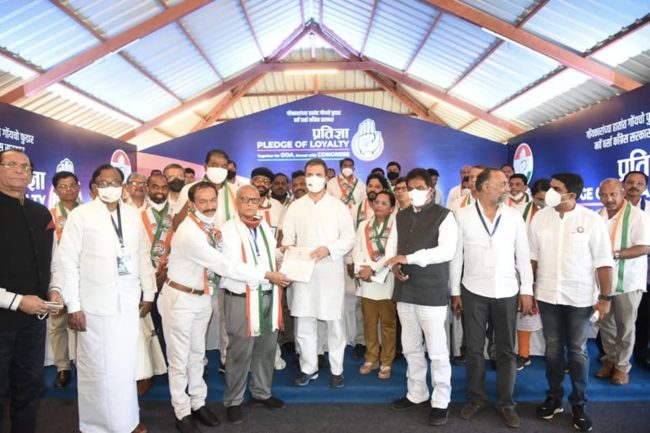 Congress Candidates take “Loyalty Pledge”; in the presence of Rahul Gandhi, vow not to defect post polls
AAP candidates in Goa were first to take Loyalty pledge in presence of Kejriwal

PANAJI: All the candidates of the Congress-Goa Forward alliance today took the pledge of loyalty not to defect from the party (alliance) after the Goa Assembly Elections.
Congress leader and MP Rahul Gandhi landed in Goa on a day-long visit this morning, during which he went for door to door campaigning with Congress Vice President Sankalp Amonkar in Sada.
Senior Congress Leader Digambar Kamat administered the oath in the presence of AICC Goa Desk Incharge Dinesh Gundu Rao, GPCC President Girish Chodankar.
“We have taken a promise in front of the temple, mosque and church. Today, we took an oath in front of Rahul, our boss,” Congress candidate Sankalp Amonkar said.
The candidates have a vow not to defect after elections. In 2017, Congress won 17 of 40 seats in Goa, and the BJP won 13. But 15 Congress MLAs switched to the BJP in 2019, led by the Congress’s opposition leader, Babu Kavlekar, who was made Deputy Chief Minister by the BJP.
The Aam Aadmi Party (AAP) made candidates sign anti-defection affidavits earlier.
Rahul Gandhi was earlier scheduled to visit on February 2,  but his visit was deferred because of parliament and his visit to Raipur for the launch of a memorial for martyrs.
Rahul Gandhi will also interact with the Tourism sector representatives, Anganwadi staff, and others. He will conduct meetings with candidates later today.
Later, Gandhi is slated to address a public meeting at the Sanquelim Assembly constituency, from where the BJP has fielded incumbent chief minister Pramod Sawant.
Congress saw many of its legislators leave the party in the recent past. In 2019, as many as 10 of its MLAs joined the ruling camp.
Total 13 MLAs have deserted teh party to join BJP.
Vishwajit Rane, Dayanand Sopte, Subash Shirodkar, Babu Kavlekar, Babush Monseratte, Jennifer Monseratte, Francis Silveira, Tony Fernandes, Clafasio Dias, Wilfred D’Sa, Isidore Fernandes, Nilkanth Halarnkar and Filipe Neri quit Congress and joined BJP from 2017 to 2019.
Recently, P Chidambaram, the party’s poll observer for Goa, said candidates have been selected keeping in mind the defections. “Loyalty was considered the top criterion,” he said.
Goa will vote on February 14. The counting of votes will take place on March 10.