Power Min must concentrate on lighting up Goa for Diwali and not on narkasurs: Khaunte

Goemkarponn desk
PANAJI: “Diwali is the festival of lights. On Diwali, the concerned Power Minister should focus on illuminating the State of Goa by turning on all the lights instead of giving his disapproval to the custom of Narkasur making effigy a subject of laughter”, said Minister for Tourism Rohan Khaunte.
Stating that one should not make politics out of such festivals, Khaunte said that Diwali is one of its kind festivals celebrated to depict the success of good over evil, and it carries mythological importance. Narkasur vadh competition is organised as a part of Tourism activity to showcase how this festivity is celebrated in the State of Goa. Ministry of Tourism, through such events, is trying to promote the festival of Deepotsav. One shouldn’t make it a subject of laughter by making such statements, added Khaunte.
Khaunte said that Carnival, Sao-Joao, Bonderam, and Chikhal Kalo are the festivals which every Goan has celebrated since their childhood. The killing of narkasur is also a part of tradition and custom and hence should be promoted to keep alive the rich Goan culture. 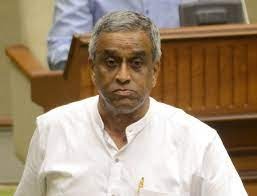 Khaunte was speaking to the media on the recent request statement made by Power Minister Sudin Dhavlikar to all the politicians to not give donations to youths to develop an effigy Narkasur.
Voicing his disapproval over the increase in the number of Narkasur-making competitions, Dhavlikar had said, “I refrain the youth of Goa from making Narkasur effigies and also request the politicians not to give a donation for Narkasur making competition”.
He further congratulated Panjim MLA Babush Monserrate for denying donations to the narkasur-making competition.
Meanwhile, slamming the State government for giving preference to organise Narkasur Competition over the Lord Krishna competition, Congress spokesperson Amarnath Panjikar said, “It is really sad that the BJP Government in Goa is glorifying Narkasuras and not Lord Krishna”. This is the true culture of the Bhartiya Janata Party which has always used religion for political benefits, added Panjikar.