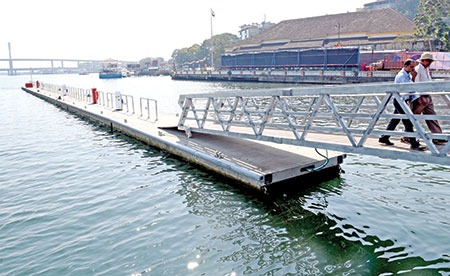 Goemkarponn desk
PANAJI: Goenchea Ramponkarancho Ekvott (GRE) today has slammed the tourism department as the department, in the name of tourism, is acting like an agent of  5/7star hotels or coal mafia in the State of Goa.
“The jetty policy in the name of tourism is planned to build several hundred jetty across all rivers in Goa in which Captain of Ports( COP) will allow registration of all vessels in Goa like barges, yachts, container ships, transport vessels, etc. to be operated in the jetties which clearly shows that the intension of the tourism department is malafide and such jetties will be eventually used for coal transportation,” said GRE General Secretary Olencio Simoes.
He further said that the State’s major rivers –like Mandovi, Zuari, Sal, Tiracol, Chapora, Terekhol, Bicholim, and Sinquerim are highly polluted, and the “Faecal coliform is exceeding the permissible limit as per CPCB classification mainly due to disposal of untreated or partially treated sewage and what will happen if more such jetties will be constructed.
GRE said that the proposed jetty policy will lead to the construction of several new jetties across Goa, which will lead to capital dredging, and this will lead to maintenance dredging annually, which will result in the degradation of the ecosystem.
“This will affect the fish and other aquatic organisms and lead to a depletion in the fish/shellfish catch and in turn deprive the fishermen of their livelihood,” he added.
Meanwhile, he further said it affects the ecology of rivers as an increase in settlement and consequent construction activity along the river banks will be the death knell for the State of Goa as due to pollution and climate change, saline water ingress will increase to multifold. Therefore we demand that Scrap the jetty policy 2022 in totality.