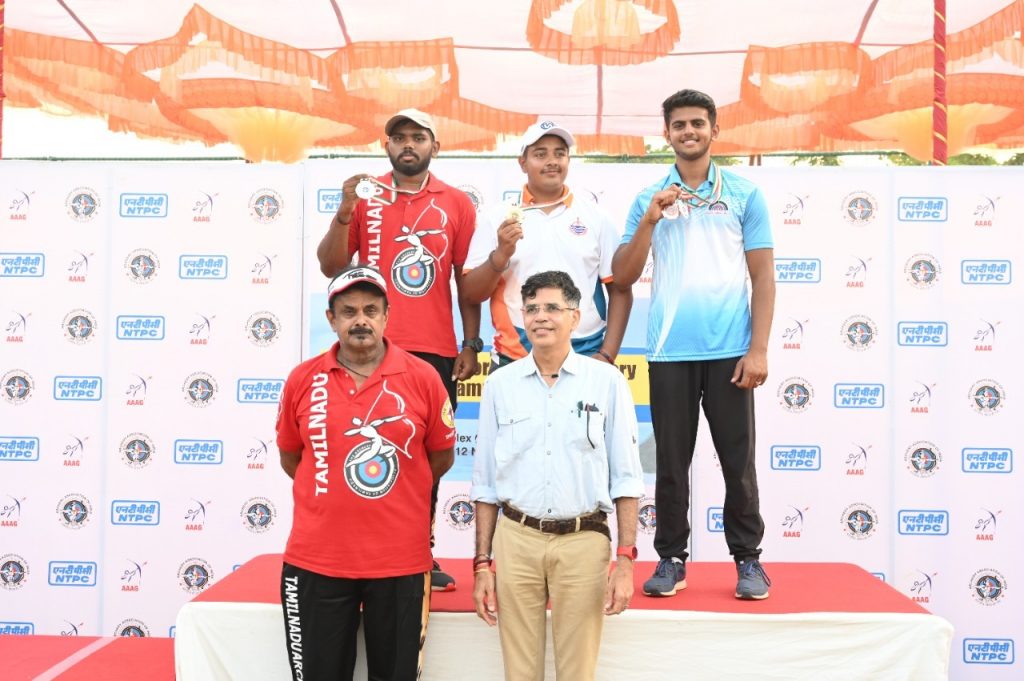 Goemkarponn desk
PANAJI: Simranjot Singh of Punjab and Sakshi Chaudhary of Uttar Pradesh were crowned the men’s and women’s champions, respectively, in the Compound Round individual competition here at the 42nd NTPC Junior National Archery Championship 2022 in progress at SAG ground, Campal. Delhi and Rajasthan reigned supreme in the men’s and women’s team events, respectively, while Maharashtra clinched the Mixed-team title.
The Compound round, which concluded on Tuesday, saw exciting action, particularly in the men’s final when Punjab’s Simranjot turned the tussle on its head in the final set to stun GR Shriram of Tamil Nadu 145-144. Trailing 115-118 after four sets of three arrows each, Simranjot started with a 10 while GR Shriram choked and shot an 8. Simranjot performed superbly under pressure with two consecutive 10s while Shriram just couldn’t recover and struck 9,9 to lose the gold medal from a winning position. Earlier, Maharashtra’s Prathamesh Jawkar won the bronze medal by beating Kushal Dalal of Haryana 145-144. 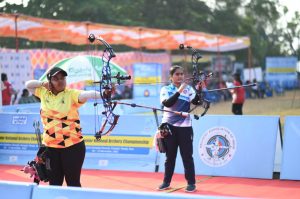 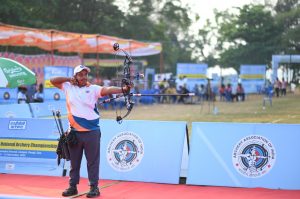 In the women’s final, Sakshi Chaudhary got the better of world record holder Priya Gurjar of Rajasthan, who emerged as women’s team champions while their mixed team bagged a silver medal. In a tight final contest, Sakshi prevailed 143-142 as Priya suffered a wobble to shoot 10,9,9 in the final set while her opponent from UP delivered a perfect 10,10,10 to gain the maximum of 30 points from the three arrows. The bronze medal in the women’s section went to Maharashtra’s Aditi Gopichand Swami, who defeated Somanshi Medatwal of Rajasthan with ease.
Earlier, National Games gold-medallist Rishabh Yadav topped the qualification stage (50+50 metres) with 711 points, but he was shocked in the individual competition by eventual champion Simranjot Singh 145-144 in the 1/16 Elimination round.
Priya Gurjar bagged the gold medal in the women’s qualification stage with 696 points. Sakshi (695) and Aditi (685) were placed second and third.
There was more encouragement in store for Goan archery as Yatin Kaushik made it to the 1/32 stage and then the 1/16 round as he defeated Jharkhand’s Ashish Kumar Singh 140-138. Then in the last-32 match, Yatin went down fighting to 3rd ranked Ritik Chahal of Delhi 141-138.