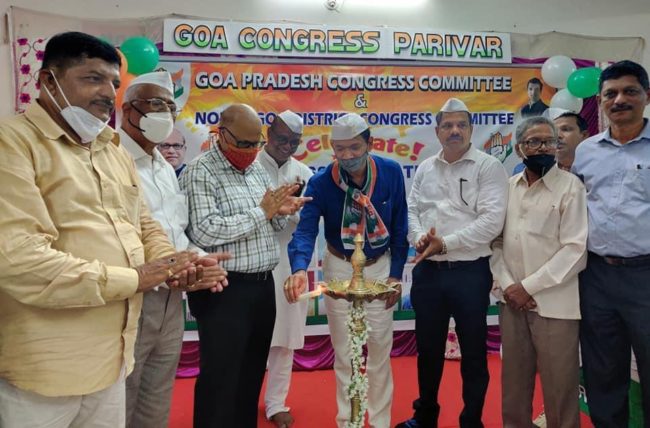 Mapuca: Launching a scathing attack on RSS and Narendra Modi government, Congress leader Girish Chodankar said that they are trying to make people of the nation frustrated by controlling judiciary, constitutional authorities and by suppressing voice of people, and asked why RSS failed to hoist the national flag at its headquarters after freedom. “people of India also want to know what exactly you were doing from the year 1885 to 1947.” Chodankar asked.

“People know what Congress has done in the last seventy years. I challenge RSS to tell people what they were doing from the year 1885 to 1947, at the time when Indians were struggling for freedom” Chodankar said.

“Congress Party is in the hearts of the people. We believe in equality and walking together irrespective of caste, class and religion. This is also a feeling of citizens of India. Hence it is the responsibility of everyone to defeat the force/power which is trying to damage our constitution and nation.” Chodankar appealed.

He said that the Narendra Modi government and RSS have finished the judiciary system. “Even there is no scope for RBI and Election commission to work as per its constitutional mandate.”

He said that Narendra Modi has controlled the constitutional authorities to suppress the voice of people and build frustration among Indians. Modi Ji wants to use frustration of people to the extent that they will be constrained to lose faith in constitutional and Democratic tools and don’t go for voting.

He informed that during UPA rule 14 crores people, who were in Below Poverty Line (BPL) were given status of Above Poverty Line (APL). But the present NDA government has reversed it and has brought APL members in BPL to make people ‘laachar’ (constrained). “It is the ideology of RSS to control people by making them poor.“ He said.

Digambar Kamat said that Congress needs to set the target and achieve it. “Nobody can change the history of Congress. We feel proud of it. But we can’t live thinking only of the past. We need to face the present.” Kamat said.

He asked Block presidents to make a commitment of registering 3 thousand members in a month. “You need to go on the field. We are targeting ten thousand odd memberships in Margao. We should not blame others, but work to achieve our goals. Our second test is municipality election. Our poor performance in Zilla Panchayat is a reality. But now we have another chance.” He said.

“I could win the election seven times because of my workers, who are the backbone of the party. I feel the resolution of New Year should be new booth committees and new members in Party’s fold. Nobody can stop us from coming into power if this is achieved.” Kamat said.

Adv. Ramakant Khalap said that while in MGP he was ideologically a congressman and tried to save and support the Congress party. “Minus Marathi and merger issues MGP was ideologically Congress. I offered my services to reorganise the party at grassroots level.” He said.