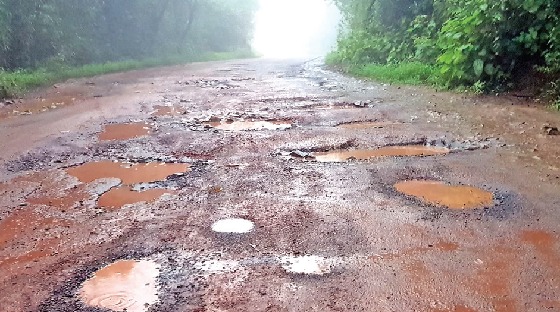 Goemkarponn desk
PANAJI: Chief MInister Dr Pramod Sawant said that he has taken up the bad condition Goa-Belagavi road issue withKaranatak CM Basavaraj Bomai, who has assured repairs.
Speaking to reporters, Sawant said the road up to the Goa border is good, but thereafter, it is unmotorable.
Conceding that travelling between Goa -Belagavi by road is a nightmare for commuters, Chief Minister Pramod Sawant said that he has discussed with his Karnataka counterpart the repair of the road at the earliest.
KTC Chairman and MLA Ulhas Tuemkar said deploying electric buses on the Goa-Belagavi road will be considered only after the Corporation receives another lot of 150 electric buses by December.
When the media drew the attention of the Chief Minister to the unmotorable condition of the Goa-Belagavi road, Sawant pointed out that the road is in a good and motorable state up to the Goa Border.
“After one enters the Karnataka side of the border, the road is unmotorable. I have taken up the matter with the Karnataka Chief Minister over the repair of the road on the Karnataka side”, he said, adding that once the repair work is undertaken by the Karnataka government, the Centre will take up the four-laning of the road.
KTC Chairman MLA Ulhas Tuemkar why the KTC has not resumed the shuttle service between Goa and Belagavi and give relief to the commuters, he said the KTC is expected to receive around 150 electric buses in December, adding that the KTC and the government will take a call on whether some of these buses can be deployed on the Goa-Belagavi route as shuttle buses.
He also said that the KTC will also have to get charging stations installed at Belagavi to charge the batteries of the electric buses operating on the route after their deployment.