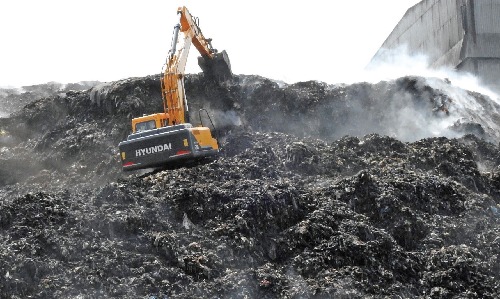 Goemkarponn desk
MARGAO: the Shadow Council of Margao on Saturday alleged a major scam in the bio-remediation and transportation of the waste dump at Sonsodo.
“It is definitely a welcome that the High Court has pulled up the Contractor, the MMC and the Waste Management Corporation for the delay in solving the Sonsodo issue. However, we apprehend that the government and the concerned authorities may misinterpret and misuse the directions of the HC by resorting to unscientific shortcuts at the cost of the environment and the public exchequer,” SCM Convener Savio Coutinho stated.
With RTI information in his possession, Coutinho and other prominent citizens, Prof Joan Rebello, Bio Chemist Cadeth Castello, Arch. Carlos Gracias, Columnist Jose Maria Miranda, Social Activist Ms. Maria Bala Fernandes, Orlando Pacheco, Damodar Onskar, Loyola Rodrigues, Anthony Baptista etc., briefed the media on the factual position at Sonsodo.
Coutinho stated that in 2016-17, the GSUDA estimated the legacy dump to be 96,750 cubic meters and projected the cost of around 4 to 5 crores. Tenders were invited, and bids were received, but the project was abandoned with the birth of the new Ministry for Solid Waste Management. A fresh proposal evolved with the listing of legacy dumps at 11 locations across Goa if a total quantity of 4.70 lakh cubic meters.
“Sonsodo alone compromised 50% of this waste with 2,31,238 m³ for Bio Remediation. It is indeed astonishing for us to realize how the legacy waste which was estimated to be 96750m³ rose to become 2,31 238m³ within a span of 2 years, Mr. Coutinho wondered,” he said.
He also revealed that the rate for Bio Remediation and transportation which was fixed/quoted for Rs. 695/-(GSUDA tender) per cubic meter in 2016, shot up to Rs. 1840/-(GWMC tender) per cubic meter in 2018.
Coutinho further revealed that according to the 5 bills paid to the Contractor, M/S. Hindustan Waste Treatment Pvt Ltd, it is claimed that 1,01,207m³ of legacy waste had been Bio Remediated, out of which 96,519m³ was disposed of away in the form of RDF material and Inert/Compost/Grit.
Coutinho stated that if an International football ground measuring 105mt x 68mt is considered to put this quantity of 68,579m³ screened material, then this mound would attain a height of 9.60mts, as high as ground plus 2 storey building.
Now though the bills project that this huge quantity has been disposed of, it remains a mystery where it could have gone. Apart from the hockey ground, KTC land and land next to the district sessions court, where the filling has been undertaken, we know no other site, Coutinho said.
Coutinho further charged that the work is not executed as per the tender, the RDF material and the Intert components do not conform to the prescribed limits, and neither Secondary screening is done, he said.
Pointing out the huge mountain of RDF material, Coutinho said that it was very clearly visible that the so-called RDF material was mixed with non-incinerable material, thus violating the laid down scope of work.
“The same goes with the Inert/Grit, which is disposed of, as it contains huge amounts of plastic and Non-biodegradable materials,” Coutinho charged.
Local resident and a Bio Chemist by profession Cadeth Castello charged that the term Bio Remediation comprises a wide range of aspects in it, and what is seen happening at Sonsodo dump yard is nothing scientific but only screening.
“The disposal of the Inert material, Compost and the RDF, if genuinely examined, will reveal what sort of Shoddy work is being done in the name of Bio Remediation”, he said.