However, the approval to subject to the decisions by the Supreme court in respective cases. 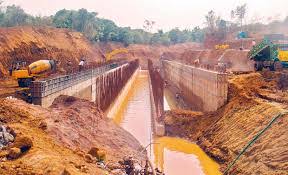 PANAJI: Central Water Commission (CWC) has cleared the diversion of 1.72 TMC of water from the Kalasa Dam and 2.18 TMC from the Bhandura dam.

Following the clearance, the Central government accepted the Detailed Project Report (DPR) of the state government.

Based on the technical appraisal by the CWC, the DPR of the Kalasa Nala Diversion Scheme and Bhandura Diversion Lift Scheme are found to be acceptable from hydrology and inter-state aspects.

Since the DPR is now approved, the state government will ensure that the tender process is started and works are taken up at the earliest.

While acceptance from hydrology and inter- State aspects, as per the guidelines of CWC, have been accepted, they are subject to the decision of the Supreme Court on a special leave petition of riparian States Maharashtra, Karnataka and Goa. Karnataka had approached the Supreme Court seeking a direction to the Union Government to publish gazetted notification of the award, following which the Centre published it in 2020.

The Mahadayi River Water Disputes Tribunal has already permitted the diversion of 2.18 tmc ft. of Mahadayi water at the Bhandura dam and 1.72 tmc ft of water at the proposed Kalasa dam in its final award in 2018, and the matter is pending before the apex court.

Karnataka submitted the revised DPRS complying with the tribunal’s direction with respect to inter-State matters, hydrology and design aspects in November 2022.

However, the note said that the approval is subject to strict compliance of project authority getting mandatory approval and clearances from technical agencies concerned as required by the Mahadayi Water Dispute Tribunal (MWDT) award and the law mentioned in the award. It has said that the final designs should be such that they are in full consonance with MWDT award as applicable.

The implementing authority has been told to communicate information related to the daily withdrawal of Mahadayi water on a regular basis to basin States, including Goa.

Once the Mahadayi Water Management Authority, as mandated by the award, is constituted, regulation of diversion would be done in consultation with the authority. Besides, it has also specified efficient sediment management.

The Kalasa-Banduri Project, a dam, has been designed to divert water from the Mhadei basin to the deficit basin of the Mala-prabha river.

However, the approval to subject to the decisions by the Supreme court in respective cases.

“In this regard, this acceptance from hydrology and inter-State aspects as per Guidelines of CC shall be subject to the decision in the proceedings before the Supreme Court in the SLPs (32517/2018 of Maharashtra, 33018/2018 of Karnataka & 19312/2019 of Goa) against the Report-cum-final decision dated the 14 August, 2018,” the CWC says.