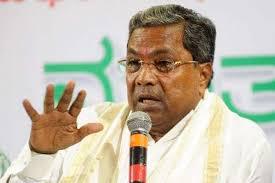 VASCO: Former Karnataka Chief minister Siddharamiah claimed that Congress party will bring Acche Din to Vasco and the state. People will teach lesson to BJP this election claimed Almeida.
During the public meeting in Mangor hill, Siddharamiah said that people of Goa are fed up with the inflation which they have seen under the BJP government. They have seen the rise in the corruption, inflation, illegalities during these ten years of BJP government.
He further said that the leaders of the BJP are only good at giving long speeches and lip service to the people. Their leaders have never sacrificed for the Country like the Congress leaders have done.
Siddharamiah further added that this time people have decided to vote for the change that is Congress party which will bring Acche din to the people of Goa and the state.
Vasco Congress MLA Carlos Almeida also took a potshots at the BJP and pointed out that prime minister Narendra Modi had promised acche din to the people of India. Unfortunately those days never came and instead people faced inflation and other chronic problems in the country. Considering these factors people will this time teach BJP a lesson” he added