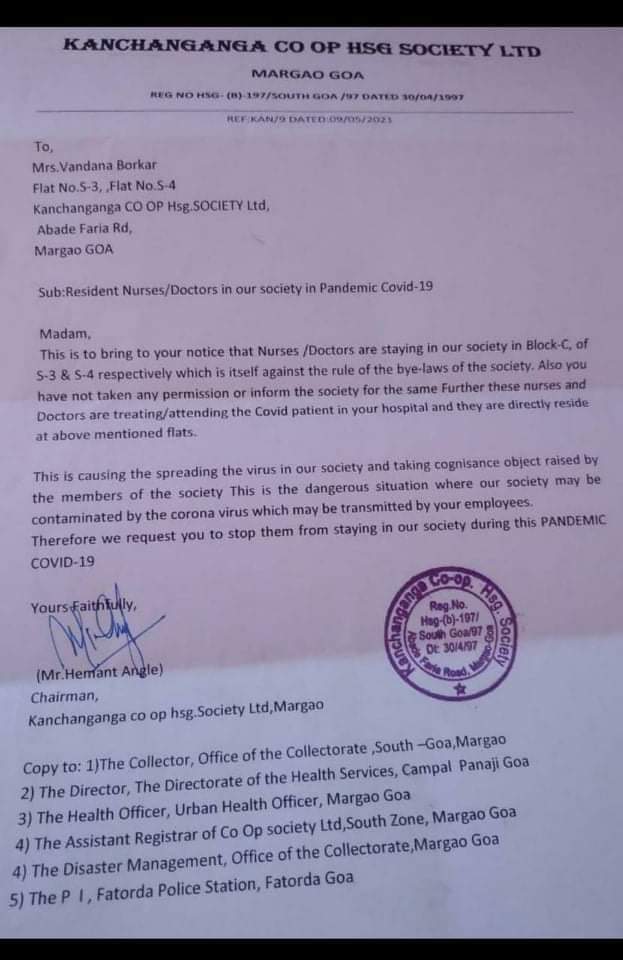 Goemkarponn desk
MARGAO: A Housing Society’s letter not allowing the health workers to stay has raked up a bizarre storm in the State.
As per the letter being circulated in social media, the letter has been written to one Vandana Borkar by the chairman of Kanchanganga Co-op Housing Society, Margao chairman Hemant Angle.
The letter says that the health workers, treating COVID19 patients in hospitals, are staying in the society which is dangerous to the other persons staying.
“This is to bring to your notice that Nurses /Doctors are staying in our society in Block-C, of 5-3 & 5-4 respectively which is itself against the rule of the bye-laws of the society. Also you have not taken any permission or inform the society for the same Further these nurses and Doctors are treating/attending the Covid patient in your hospital and they are directly reside at above mentioned flats,” the letter reads.
Further, it says, this is causing the spreading the virus in our society and taking cognisance object raised by the members of the society.
“This is the dangerous situation where our society may be contaminated by the corona virus which may be transmitted by your employees. Therefore we request you to stop them from staying in our society during this PANDEMIC COVID-19,” Angle says in the letter.
Following the criticism on social media, Angle took to facebook to clarify his stand.
”This letter is a matter between the Society and its member. It is sad that this internal letter was publicized and instead of boldly replying to it have twisted facts and circulated in media,” he says.
He says the letter is being totally misconstrued and the professionals should rest assured that we are in awe of their yeoman service to this profession in good times as well as in these trying circumstances.
“However, our letter stands as our committee is first bound to the welfare of our members. When doctors and nurses come out of the adjacent hospital, owned my our member, in their used PPE enter the society, the veranda and steps of their block and climb 2 floors sometimes brushing our members who are alighting, isn’t the fear factor going to enter their mind? With used masks, used PPE suits and other surgical, which are a waste in the hospital stored in the flats doesn’t cause panic in our members?” he asked.
He says the owner was contacted twice on whatsapp regarding this matter and was requested to stop this matter, but no reply.
“Then when written complaint came to the Society, then the committee had to act. And what have we requested? To shift the staff elsewhere and stop them from staying in our society as the hospital management were not listening to our requests,” he says.
Angle says that as pointed out earlier, the letter stands and we would like it to reach its logical conclusion as the government agencies like the Hon. Collector, Health Department, Registrar of Societies, Disaster Management are now involved and their directions on this issue would be awaited.