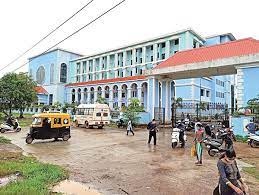 Goemkarponn desk
PANAJI: The Aam Aadmi Party on Tuesday criticized the BJP government for the lack of infrastructure in the newly built South Goa District Hospital. AAP Youth Wing National President Siddesh Bhagat claimed that the BJP talks about development and double-engine government, while the reality is completely different.
In reality, the South Goa District Hospital itself is in critical condition.
Bhagat claimed that the recently constructed South Goa District Hospital lacks essential amenities while speaking at a press conference at the party’s Panaji office. “24×7 Pharmacy and canteen service are vital. It is also essential that doctors and nurses are available. A district hospital’s casualty section, however, consists of a CMO and two trainees”.
Adding he said, “It hasn’t been even two years since the district hospital was built, but it is in critical condition. As a result of a lack of beds, a lack of medical staff, and now a broken elevator, the situation has gotten worse. “Patients have to stand in line for hours”.
Bhagat asks Health Minister Vishwajeet Rane to make a surprise visit to the district hospital to assess its sad state. “The number of dengue, chickengunya and Covid cases has increased. In some parts of the South Goa district, such as Rumdamol, there are no Primary Health Centers. As a result, everyone visits South Goa District Hospital. Accordingly, the health minister should ensure that proper facilities are provided at the district hospital”, he said.