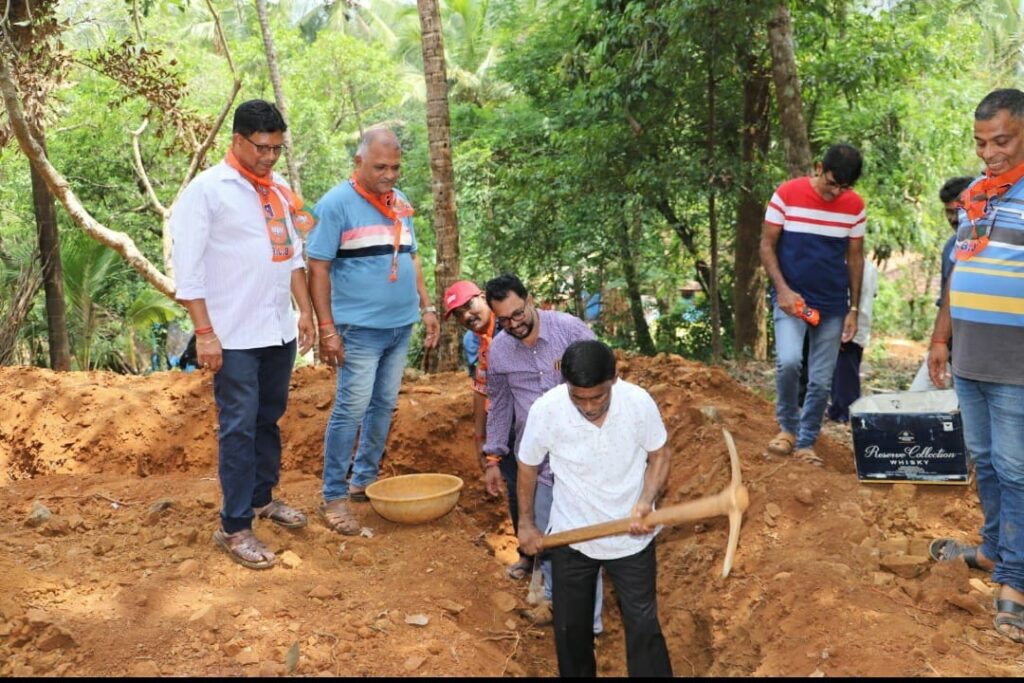 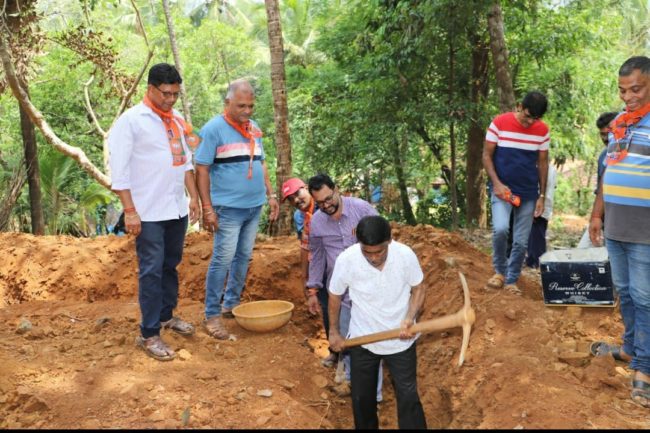 CANACONA – Stating the Construction of a House for one of our needy sisters under Seva Sankalp at Mahal-Badde village in Khotigao panchayat is important, GLA Speaker and Canacona MLA Ramesh Tawadkar, along with BJP Mandal and Karyakarta’s personally carried out works on Saturday.

House construction of Kamlakar Gaonkar @ Mahal-Badde in Khotigao is one of the two houses to be built under BJP’s Seva Salkap program to which the foundation was laid at the hands of Chief Minister Dr Pramod Sawant on 9th April. The other house is of Somnath Mirashi @ Ziltawadi (Gaondongrim).

Tawadkar had then assured to complete both these houses in a month. Incidentally, virtually repeating the laying of the foundation on Saturday at Baddem (Khotigao), Tawadkar announced to complete the house in a month.

According to BJP Canacona Mandal, along with Tawadkar, members of BJP Mandal and BJP Kaaryakarta under the Leadership of Hon’ble Speaker Goa legislative assembly and Tawadkar carried out works at the construction site to build a house for one Kamlakar Gaonkar at Mahal-Badde in Khotigao village.

It may be recalled that Chief Minister Dr Pramod Sawant, during his first visit to the taluka(9th April) after his assumed office for the second time, had laid foundations to build two houses at Baddem (Khotigao) and Ziltawadi (Gaondongrim) and have announced One lakh each from the Chief Minister Relief Fund. While several others were present for the function contributed, Speaker and Tawadkar announced both Houses would be built by Contribution from the BJP Karyakarta and completed in a month.

After making a notable presence at the construction site on Saturday (14th May 2022), and digging with a Pikaxe alongside a JCB pressed into service, while more BJP Karyakarta’s participated in related menial construction works, Tawadkar said, “Working on the principle of Antyodaya Tatva, Our mission will be to reach the last person ensuring his full support for livelihood.’

‘All our office bearers of BJP Mandal, Mandal Committee, BJYM, BJP Mahila Morcha, Councillors, Panch members and all Grass root level Karyakartas along with villagers participated in this unique concept to make it successful’, informed a Mandal member.

On 9th April Chief Minister laid the foundation stone to construct the houses for the families of Late Somnath Mirashi of Ziltawadi and Kamlakar Gaonkar of Khotigao.

Incidentally, a month after laying the foundation stone by the Chief Minister, neither walls nor slabs were seen; Speaker Tawadkar and BJP Karyakarta wearing BJP neckties were seen still working on menial work of digging trenches for the house construction.