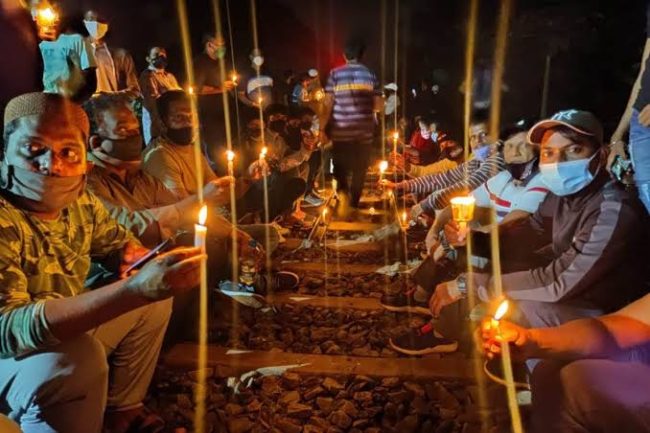 PANAJI:  Despite the stiff opposition and the raging debate on doubling track from Culem to Vasco, the State government seemed to be hell bent on proceeding ahead with the project.

The protesting citizens and groups claim that the doubling is only for increase in coal transportation, which has been having catastrophic impact on the people of the State.

In a return reply, the Chief Minister Dr Pramod Sawant has said that it is mainly for passenger traffic and defence purposes.

The Chief Minister says that the State expects the rail traffic to increase by six times.

“Currently, 6000 to 7000 passengers / day are travelling by train on this section and cargo amounting to that of 6 to 7 Goods trains is transported daily,” Sawant said.

He further added, ”as informed by the South Western Railway authorities, 54000 to 65000 passengers may avail the benefit of travelling in this route after completion of doubling.”

He, however, said from the past experience of doubling in other sections the quantum of increase in goods traffic after doubling cannot be assessed at this stage.

“At present, 12 passenger trains & 6 to 7 Goods trains are plying on this route and informed by the South Western Railway authorities, expected increase of passenger trains may be up to 90,” he says.

Sawant says, “This is an important project for strengthening infrastructure and to improve connectivity, which will lead to socio-economic development of people of the State of Goa. Apart from this, the project is also important from defence strategic point of view to meet any requirement of Naval Command at Goa at short notice in case of any emergency.”

Giving further details, the chief minister says,  the State The Ministry of Environment, Forest & Climate Change has granted Stage-I (In-principle) approval under the Forest (Conservation) Act, 1980 for diversion of 138.39 ha of forest land for the 3 project proposals of Doubling of Railway Tracks submitted by South Western Railway.

“An EIA has been carried out for Doubling of South Western Railway Tracks. The length of the stretch covered in the Environmental Impact Assessment (EIA) within Wildlife Sanctuary & National Park is 27.62 Kms. The Doubling of Rail line will be done along the existing rail line using primarily the Railway land of 84.99 ha. which was earlier included in Bhagwan Mahaveer Wildlife Sanctuary & National Park and now has the status of forest land,” he continued.

Further, he adds, the EIA report prepared by Indian Institute of Science, Bangalore on behalf of South Western Railways, suitable mitigation measures have been proposed to minimize impact on wildlife and ensure safe passage to wild animals.

“However, in order to reduce accidental killing of wildlife several mitigation measures such as i)use of signage for workers/ staff ii) using experience train drivers iii) sensitization of train drivers iv) regulation of garbage disposal v) joint patrolling etc. are proposed. Eight (8) underpasses have been proposed in the entire stretch, so as to facilitate smooth movement and crossing of wild animals,” Sawant explains.

Further, he added, on the recommendations of the Chief Wildlife Warden, Railway Authorities have been instructed to explore the option of putting gates on tunnels opened through some mechanical/ electronically controlled switches before train arrivals for minimizing trapping of wild animals in tunnels.