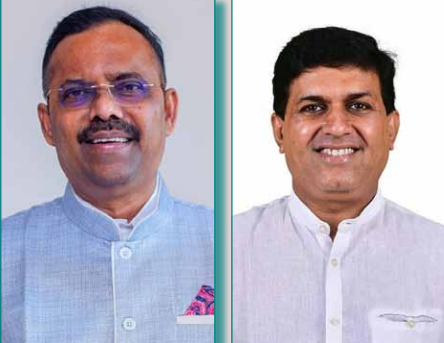 DAJI v/s CARLOS…
Time and again, Almeida has shifted the blame on the BJP govt, which he claims has neglected the Vasco constituency despite regular follow-up of several pending works. Almeida has got the support from a few municipal Councillors who have remained loyal and are busy campaigning for him.
On the other hand, Krishna (Daji) Salkar, who had contested as an Independent last election and was defeated with a thin margin, seems to be confident that contesting on a BJP ticket will surely win become the MLA of Vasco.

VASCO: Vasco Constituency will witness a cutthroat election fight between the Bharatiya Janata Party and Congress party.
The former contenders Carlos Almeida (INC) and Krishna (Daji) Salkar (BJP) will be once again locking their horns for the assembly election to defeat each other and win the Vasco seat.
This time, it will be a straight competition between the formerly independent and present BJP candidate Salkar, the Former BJP MLA, and the present Congress candidate Carlos Almeida.
Vasco constituency had voted Almeida twice to victory, and he became KTCL chairman. Vasco, a Port town of Goa, has not seen robust business, trade, and commerce activities flourishing in the past few years. There might be various reasons for it, be it the mining closer, the Covid19 pandemic or the financial crunch, internal politics on the government side. Indeed, the people of Vasco have not got the facilities and services they deserve.
Almeida, during his term, tried to bring several major public utility projects such as the KTCL bus stand at Vasco, Fishmarket complex, powerhouse project, restoration of the municipal building of Vasco, some of these works which are in the pipeline but for a long time, these works have not seen the daylight. People have been agitated regarding several incomplete projects and the inconvenience caused to them. Many have also questioned the inefficiency of the BJP government, and the neglect which has been done by the government in the case of Vasco is concerned. Almeida is doing door to door campaigning and shares a good rapport with the people of his constituency. Time and again, Almeida has shifted the blame on the BJP govt, which he claims has neglected the Vasco constituency despite regular follow-up of several pending works. Almeida has got the support from a few municipal Councillors who have remained loyal and are busy campaigning for him.
On the other hand, Krishna (Daji) Salkar, who had contested as an Independent last election and was defeated with a thin margin, seems to be confident that contesting on a BJP ticket will surely win become the MLA of Vasco.
On several occasions, Salkar has expressed that it has been his dream to become the MLA of Vasco and serve the people of Vasco by bringing various developmental projects to public works which will benefit the people.
Salkar has remained active in the social domain, participating in socio-cultural activities and municipal politics.
With the recent visit of Chief Minister Dr Pramod Sawant, Home Minister of India Amit Shah and others in Vasco will surely go to work as an add on benefit to Salkar.
When contacted by some locals from Vasco, Shahrukh Adda said that Carlos does not discriminate against people on a religious and community basis. He has done several works of the people without taking a penny. He is non-corrupt and is available for the people of his constituency.
Another person Eknath Shirodkar said that BJP has done injustice to Almeida, who has made the BJP’S roots firm in Vasco. Carlos Almeida has given jobs to over 350 people without any expectations. Many councillors are with Almeida. Therefore, the civic works of the people also happen immediately.
But, there is a section of the people firmly standing with Salkar. Sanket Lotlikar, a businessman, said that Late Manohar Parrikar had initially asked us to support Almeida a few years back, so we backed Almeida, but we have not seen any significant development for all these years in Vasco under Almeida.
Therefore people have decided to support Daji this time. Daji has done various works being a city Councillor, and we need someone like him who could bring some development to Vasco.
Mamata Tari, from Vasco, also said that Daji Salkar was a thrice city Councillor, and people have seen how he had worked to resolve civic issues in the town. Salkar has helped all without discriminating against anyone. He was a BJP supporter from the beginning, and this time the majority and the minority will vote for Salkar, and he is likely to cross 14000 votes.
It may be recalled during the last assembly election in 2017, Carlos Almeida contested on Bharatiya Janata Party(BJP) and won the seat by getting 8765 votes defeating Krishna (Daji) V Salkar(independent), who got 7414 votes. Almeida won with a margin of 1351 votes.