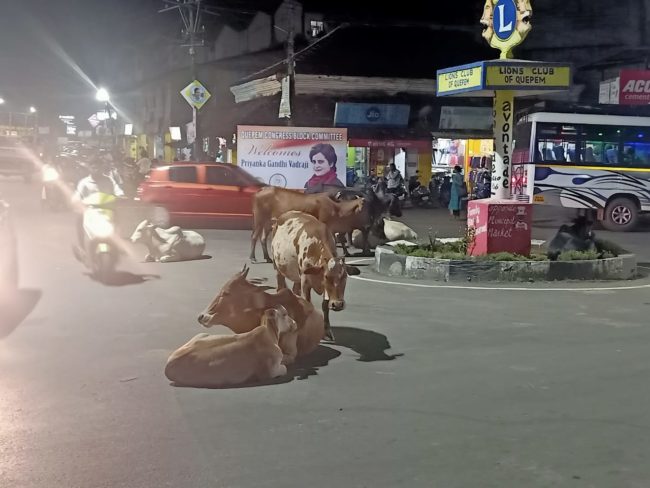 (Stray cattle are seen lying down on the road obstructing the traffic movement.) 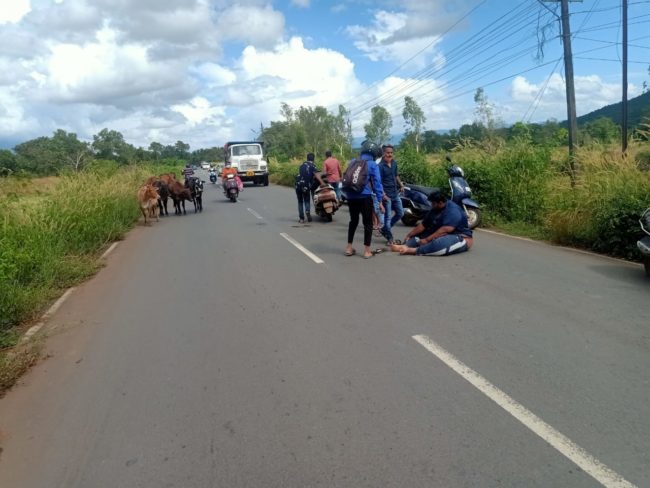 Goemkarponn desk
CURCHOREM: Free movement of stray cattle on the busy roads have become a real pain for the commuters from Curchorem, Xeldem, Quepem and nearby villages. These stray cattle are seen roaming in the streets and lying on busy roads, which leads to traffic congestion, accidents, and unwanted delay.
The increasing presence of stray cattle on the roads is purely the failure of the local governing bodies and the cattle owners who tend to leave their cattle to graze in the open. This has only resulted in great inconvenience to the people who commute on the roads.
The cattle owner must take care of their cattle, and if in case it is the stray cattle, then the locals governing body, be it the Panchayat or the municipality, should have its own cattle pound shed and cattle pond keeper take care of the stray cattle. But unfortunately, as per the available information, hardly any Panchayat or municipality has its own cattle shed.
When contacted, some people from the Xeldem and nearby areas get to know various views.
Tony Fernandes, activist – Tilamol said Stray cattle roaming on d road have become a serious menace as several lives have already been lost and many injured due to accidents involving stray cattle, now it’s very important to take necessary action for the safety of road and people, Which is missing from a responsible authority like Panchayat and local municipality.
Franky Fernandes, the social activist, opined that Tilamol junction/ circle seriously needs stray cattle management in place as the stray cattle block the roads at night. It becomes very difficult for riders and drivers to get them off the road. The matter has to be tackled appropriately before it leads to a disaster.
Meanwhile, Ravindra Wadikar, the secretary of Xeldem Panchayat, said that there are many compliments about stray Cattle, but because Xeldem Panchayat has only cattle pounder, so that why there is an issue to control the situation, further he added there is a proposal from some panch member to borrow cattle pounder from the local area, but some panch member does not agree on this proposal that why this issue yet to find a solution on this stray Cattle issue told by Xeldem panchayat secretary Ravindra Wadikar.

Goemkarponn Desk PORVORIM:Chief Minister Dr Pramod Sawant today as assured the House that the second installment of the maintenance grants to schools has been pending ... Read More

Goemkarponn desk PORVORIM: The two-day Goa Legislative Assembly started on a stormy note as the united opposition created a ruckus by entering the well of ... Read More